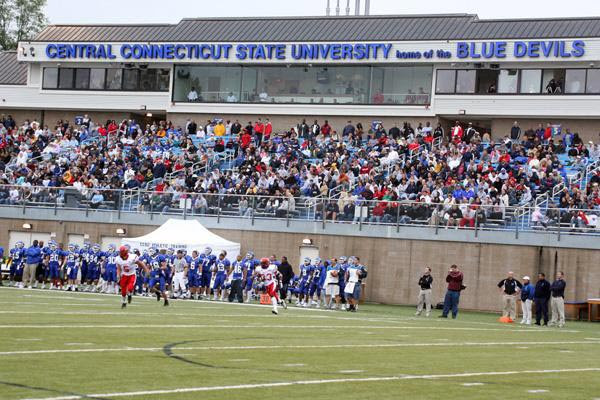 If there's one thing Central Connecticut State head coach Jeff McInerney wants you to know, it's that he's Fire[d] Up for this weekend.

Or more accurately, if you follow his Twitter feed or anything related to the Blue Devils, it's #FireUp, which is more distinct than the #FiredUp hash tag when you look up anything from President Bill Clinton's speech at the Democratic Convention or the latest on someone else's Tweeting habits.

The Blue Devils are somewhat of a mystery team in the NEC this year - even after their opening game.  Their personnel is still relatively new.  Their gameplan, as always, will be loaded with interesting tricks.  But one thing that isn't a mystery is that a Jeff McInerney team will reflect the passion and burn of their head coach.  They will, indeed, be Fired Up.

Anyone who was thinking "upset" when Central Connecticut State visited the Seawolves last Saturday had their hopes quickly dashed after Stony Brook connected on not one, but two big touchdown plays of over 84 yards to leap to an early 21-0 lead.


"We gave up too many big plays on defense," McInerney said in the post-game press conference. "We had our moments, and then in the second half they just grinded us. But I saw some spots. You can see we have some hope."

You can bet that McInerney will instill it in his players to limit the big plays against Lehigh as well.

"We're playing three playoff teams that won playoff games," McInerney said before the season.  "They're fully funded programs, so we're going to see where we're at. You can't make an excuse. You've got to be competitive. We've been able to, in the past, pull one or two of these [upsets] off. We're going in to win, but we have to keep everything in perspective. We have got to get better."

McInerney knows from whence he speaks.  Three years ago, one of those "upsets" came against Lehigh.

"The defense - who, remember, had injuries mounting on this hot day, were on the field nearly 30 minutes and were working their way down to the freshmen on the defensive depth chart - fell apart," I said in my recap.  "The worst thing about the drive was that Lehigh had CCSU stuck on a 3rd and 5 - then tried to get a late personnel change while CCSU QB Hunter Wanket quickly snapped the ball. It was a 15 yard "illegal participation" penalty - which kept the drive alive and what ultimately ended with a 40 yard screen pass to CCSU WR Josue Paul for a TD. That TD would end up being the difference."

The good news is Lehigh will not be completely surprised by CCSU's team when they travel up to New Britain this weekend.  That's because head coach Andy Coen knows them well from their 2009 visit, of course, and they have the game films from last week's game.

But coach Coen was at pains to point out in the presser this week that there's still a lot of newness with his team that they might need to work through, especially after a somewhat sloppy opening game which Lehigh nevertheless won 27-17.

"Your first road game of the year, with a new team, and we're going to have a handful of guys on their first trip," he said.  "There are fewer distractions, so you're really focused on football and I like that part of it, but you're playing a good football team who's successful on home, that just adds to it."

The old saw is that the biggest improvement a football team makes is between Game One and Game Two, and while both CCSU and Lehigh both are coming from the opposite ends of the Won/Loss column, both have plenty of scope for improvement from last week.

"If we want to keep moving in the right direction, we need to really clean up all the mistakes we made last week," Coen said.  "And show improvement in all three phases to get a win here Saturday."

Vuono is in the starting lineup, moving to guard while junior OL A.J. Hood sliding in at right tackle, with sophomore OL Kyle Moore on the depth chart behind him, and senior C Vinny Pelligrini moves to center, with Ruley, who has been battling a back problem last week, will back him up.  Lippincott "is still just not there physically", Coen told Michael LoRe of the Express-Times about the reshuffled line.

They're not the only new faces on the depth chart this week.

Senior TE Jamal Haggins is "doubtful", according to coach Coen, which means sophomore TE Tyler Coyle will most likely get his first start as a Mountain Hawk in his place. Nothing against Coyle, but the loss of Haggins is a big one, on both the blocking and receiving side of the ledger.

Making matters even more complicated, senior LB Jerard Gordon, the guy who returned the fumble last week for the game-clinching touchdown against Monmouth, will also likely not make the trip.  Senior LB Adam Francis takes his place on the depth chart.

It's going to be interesting to see how the "O" line gels this week with all the changes.

Weather Report
Compared to last week's 95 degree oven at Murray Goodman, the weather for Saturday's noon start at Central Connecticut State is set to be a perfect 80 degrees, with a chance of showers that is falling fast.  Odds are your trip to New Britain will see great weather for football.

The answer to that question is that the Blue Devils have tasted a lot of success over the last six years under head coach Jeff McInerney, with signature wins over Georgia Southern and Lehigh, both on the road.

And with a newly-revamped Arute Field, which will be able to hold upwards of 6,500 fans, Central Connecticut State will be looking to one message on their home opener against the Mountain Hawks September 8th: that they have arrived.

Central Connecticut State's facility improvements aren't huge - it's really just the addition of new seating on the visiting side of the stadium -  but they are significant improvements that effectively double their seating capacity, and put them on par with other Eastern-based FCS programs like New Hampshire and Rhode Island, among others.

Just a year ago, it might have been doubtful that CCSU could have handled Lehigh's travel crowd, which is hardly the largest away crowd in the world of FCS.  Now, though, there's a halfway decent chance of a sellout in newly-revamped Arute field.


CCSU head coach Jeff McInerney has given the former "Teacher's College of Connecticut" unprecedented success: he's the first head coach of the Blue Devils to ever post a winning record in his first three seasons.  Last year, though, was a struggle, as the CCSU went an extremely disappointing 4-7.

Like Monmouth, the Blue Devils compete in the limited-scholarship Northeast Conference, or NEC.  The schools offer up to 40 scholarships and, like Lehigh, compete for an autobid (or at-large) bid to the FCS playoffs.  The NEC champion last year, Albany, played the second most thrilling playoff game of the 2011 playoffs when they very nearly picked off Stony Brook, losing on a last-second interception, 31-28.

(No awards as to which FCS playoff game was THE most exciting.)

Of course nobody actually pays to be a part my Drinks of the Week.  But take heart, good readers.  That means I can really, honestly bring up drinks that are enjoyable and appropriate for the best tailgates.  So I won't get rich, but I'll remain - as ever - artistically pure.  You're welcome.

On that note, last time I brought up a drink for a game involving Central Connecticut State, it resulted in a Lehigh loss.  So no "Cool Blue" this time.

Instead, dear readers, might this week's drink be something I've rediscovered this summer, surprisingly: Guinness.  When I was much younger, I remember by first Guinness, which I found way too thick and way too bitter.  But after trying it again this summer, it was different; more smooth, better tasting, and unexpectedly lighter.

So, up in New Britain, I'd suggest bringing some ice-cold Guiness - even in the can it's OK - and enjoying one before the noon start.

Sensible drinking can be a part of a pleasant tailgating experience, but only if you drink responsibly and for God's sakes don't get behind the wheel of a car when having consumed too much alcohol.