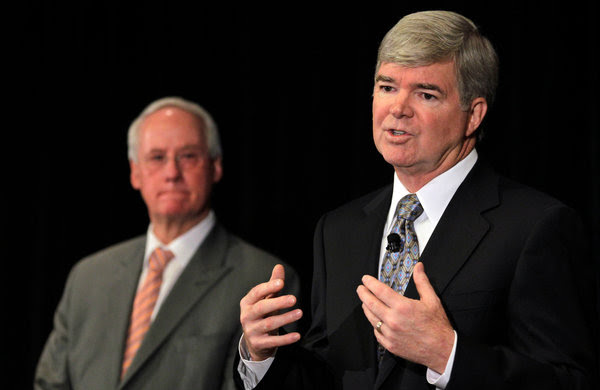 In the end, it stopped short of the "death penalty", but in ways, it was tougher than the penalties the NCAA delivered to SMU football back in the 1980s.

In NCAA commissioner Mark Emmert's 9AM press conference this morning, he stopped short of forcing the disbanding of the Nittany Lion football program for a period of years, thanks to the Freeh report which concluded that key people in the football program, at a bare minimum, covered up strong accusations of child rape.

He instead imposed a web of different punishments on Penn State in order to make an example of their program, however, which was unquestionably the correct course of action for the NCAA.

Those who said that the NCAA had no authority or enforcement options available in this matter look mighty foolish today after Emmert's press conference.

There he announced a four-year bowl ban, $60 million in fines, scholarship reductions to bring Penn State down to FCS levels, what amounts to be a "hall monitor" for the Nittany Lions for the next four years, and plenty more.

By perpetuating a "football first" culture that ultimately enabled serial child sexual abuse to occur, The Pennsylvania State University leadership failed to value and uphold institutional integrity, resulting in a breach of the NCAA constitution and rules. The NCAA Division I Board of Directors and NCAA Executive Committee directed Association President Mark Emmert to examine the circumstances and determine appropriate action in consultation with these presidential bodies.

As if even more needed to be said on the NCAA's authority on the matter, Ed Ray, Oregon State's president and the current Executive Committee chair, added "This egregious behavior not only goes against our rules and constitution, but also against our values."

It was an effective show of power that made the Big Ten's sanctions, not insignificant at $13 million along with the Nittany Lions being declared ineligible for the Big Ten Championship game, seem a lot smaller than it actually was.

Whether you agree with the details of the sanctions, whether they go too far or not far enough, one thing that should be clear is that more was needed than just simply letting "justice take its course".

What Emmert and the NCAA understands is that as an institution of oversight, you cannot simply let something like this go without punishment.

If you can let schools pretty much do as they please, with no adverse consequences for complicity in rule-breaking, let alone felonies, then college sports will fall apart.

You don't think so?  Try to visualize the next big scandal to rock college athletics, say, North Carolina's growing scandal about special courses for athletes without actual classes.

How can the NCAA act in that case, or any case for that matter, if Penn State was effectively allowed to do what it wanted to cover up for itself simply because it was Joe Paterno?

I wrote not all that long ago for this case that Emmert needed to channel his inner Elliott Ness, the man who took the much-mocked Department of Prohibition and used unconventional methods to take Al Capone to task.

Emmert did that today.

He used unconventional methods to send a message that cover-ups to crime in the athletic department will not be tolerated.

He said your name will be wiped from the record books.

While there might not have been a specific law "do not attempt to cover up the activites of serial child abusers and give them season tickets to games," he said that - hello! - this sort of abhorrent behavior is against the NCAA's constitution and bylaws, and won't be tolerated.

And make no mistake, as much as this was about what Sandusky did, this is also about every big-money athletic department in college sports.

"Emmert said all universities must now contemplate whether their own athletic programs had become 'too big to fail,' or, even more troubling, 'too big to challenge,'" the New York Times' Pete Thamel reported.

This is a shot across the bow by the NCAA to re-emphasize what is important here: the mission of education, and the role of athletics in that mission.

And that's a good thing.

Penn State is not the only institution or conference where there are extremely large revenue streams to protect - in the case of the Nittany Lions, $60 million per year, the number which Emmert "leaked" today was one year of profit from Penn State football.

And with the unbelievable amounts of money now going to certain schools thanks to money from TV, there's more incentive than ever for the largest athletics departments to protect their money stream rather than kids, or the community.

With great power comes the need for some level of oversight, and the NCAA is the only institution that can do it.  The government can't do it.  The conferences can't do it.  And the schools cant do it, either.


I come at this as a guy who absolutely loves college football.  I've spent an unhealthy amount of my spare time devoted to writing about it, and attending games.  Heck, I am an avid watcher of the games the schools put on TV.

And trust me when I say I'm not always a fan of everything the NCAA has done.

But I believe the NCAA did the right thing here today.

Sure, there are still plenty of questions as to how Penn State can clean up their "athletics culture" without a larger level of checks and balances on the University president and the board of trustees, something that was not made clear by the NCAA's actions today.

(Since the NCAA is effectively an organization run by committees of university presidents, a very legitmate question is: who will watch the watchers?)

But I have to beleive there is a way to balance the larger and larger amounts of money coming into the world of college sports and the mission of education.

And that meands someone needs to be there to enforce the rules and make sure that the revenue stream isn't protected over human decency.

About the only thing that's crystal-clear through this sordid affair is that letting the schools and conferences police themselves simply isn't an option.

Emmert today said that organization is the NCAA has to be the police that keeps the schools in check.  It has to be.