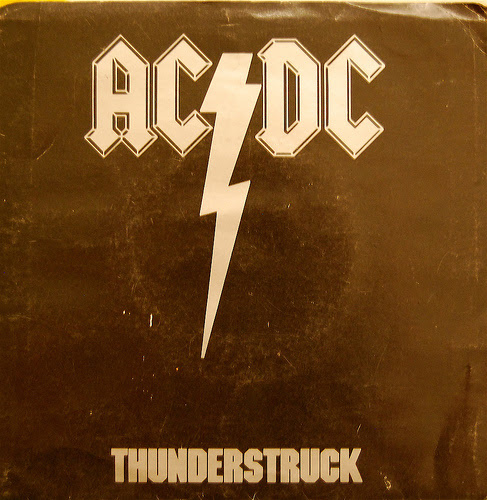 Lehigh's great playoff ride has come to an end in the ThuderDome, where a loud, partisan North Dakota State crowd listened to an AC/DC song with the title of this "Sunday Word", "Thunderstruck", and struck down Lehigh's offense, shutting out the Mountain Hawks 24-0.

It was a disappointing ending to an otherwise wonderful, historic season for Lehigh - one that will go in the record books as one of the best ever.

Yet it's impossible to look at this game at some level and wonder, "What if?"

What if senior QB Chris Lum's favorite receiver were not suspended in an unprecedented move by Montana athletic director Jim O'Day, representing the NCAA's FCS subcommittee?

In other words, what might have happened had junior WR Ryan Spadola not been "thunderstruck" by O'Day and the NCAA?

In my 24 years of following and covering Lehigh and Patriot League sports, I had never seen anything like what happened this week in regards to the Ryan Spadola suspension by the NCAA.

My feelings on the matter, issued minutes after O'Day announced the suspension, haven't changed one bit since I commented on it late Thursday.  It's hypocritical for the NCAA to put the hammer down on one player for this when the Cam Newton, Reggie Bush and countless other "big-time" athletes game the system in plain sight with, in effect, no punishment.

(And with the relatively light punishments given to Xavier and Cincinnati after their all-out brawl, with Musketeer guard Tu Holloway saying that he had a "bunch of gangster" teammates in his locker room, it seems like the beat just goes on in terms of punishing star players and holding them accountable for what they say.  Holloway got a one-game suspension for his role in the brawl, which will take place in a meaningless out-of-conference contest against Oral Roberts University.)

But other Lehigh fans weren't just content to stick their heads out the window and say, "We're mad as hell, and we're not going to take this anymore!"

They compiled dozens of inappropriate "tweets" from North Dakota State and players from the school where Mr. O'Day is the athletic director, Montana, and sent it to them and NCAA president Mark Emmert.

They pointed out that several Montana players' sins went well beyond tweeting.  In two separate incidents over the last two years, CB Trumaine Johnson and another student beat another student unconscious and, more recently, was arrested in conjuction with an incident with police at a party.  In addition to these incidents, it came out as well that Johnson also had an unpaid speeding ticket as well.

O'Day said at the time of Johnson that the matter would be handled "internally,"  a fact that did not go unnoticed by Lehigh Nation.

While one tweet was deemed enough to have Spadola to sit out a game - a retweet of language not even initiated by the star player - folks are still waiting for Johnson's repeated run-ins with the law to be "handled internally".  Since the arrest, Johnson has continued to play, getting two tackles and an interception in Montana's 48-10 win over Northern Iowa.

The combination of singling out Spadola, while so obviously looking the other way with his own program, caused Lehigh nation to explode over the whole incident.

At best, the suspension was unprecedented.  As I mentioned minutes after the announcement, no athletic participant has ever been suspended before for tweets by the NCAA.

And fans also accurately pointed out that the NCAA, by doing this, has set a precedent that any tweets containing inappropriate language now are fair game for suspension.  But since if this were actually enforced there would be so few athletes available to play the games that the enforcement is bound to be subjective, opening up the NCAA for charges of personal attacks on individual programs.

It even made some people wonder whether Lehigh and the Patriot League ought to even participate in the FCS playoffs at all.

If subjective, seemingly personally-motivated suspensions are all a part of the process, why even bother?  Lehigh and the Patriot League are different than state flagships like Montana and North Dakota State -  not that there's anything wrong with that - but it's hard enough for Patriot League schools to compete nationally without tying Patriot League teams' hands behind their backs with subjective NCAA suspensions.

If I have a fearless prediction about this whole historic affair, it's that this whole sorry chapter is not going to end well for Mr. O'Day.  Whether his motivations were personal or not, I cannot say.  But he's opened up a can of worms for athletic departments and the NCAA that will be impossible to reverse.  Every stupid tweet, or retweet, or social media post is now fair game.

And I know that the situation around the facts involving Mr. Johnson are not going to go away, either.  By putting his name to this, he's put his own program on a pedestal.

And if his "handling" of Mr. Johnson is any indication - a one-game suspension against a Division II team in 2010, and no suspension for his latest arrest - he will be enjoying his own time under the spotlight as well, whether by the consistent lobbying of Lehigh fans, or perhaps even the NCAA.

Lehigh was "thunderstruck" by the suspension, but in the end it might be Montana that feels the lightning strike.

On Saturday, I wrote that the Spadola suspension wouldn't have made any difference in the outcome of the game.  I still feel this to be true.

Yet thanks to O'Day and the NCAA, we'll never really know if Spadola's presence would have had an effect.

Spadola's suspension took place when he was 99 yards away from the FCS single-season record for receiving yards in a season.  You can't simply take a player like that out of a game and expect the offense to not miss a beat.

But I watched that whole game, heard the noise (of which AC/DC's "Thunderstruck" was a big part, the ThunderDome's theme song), saw that defense.  The Bison defense is for real.

They don't have one superstar on defense, though CB Marcus Williams comes the closest with 7 interceptions.  Their defensive gameplan against Lehigh's precision offense was perfect, with fearsome blitzes from all angles and rushing senior QB Chris Lum at every passing opportunity.  Their front seven dominated Lehigh's offensive line in a way they had not been dominated all season, and Lehigh played some teams - notably another Bison team, Bucknell, with DE Josh Eden and DT Robert De La Rosa - with similarly talented athletes up front.

And yet, for the Bison, they certainly benefited from his absence, too.  Their gameplan would have been the same with or without Spadola.  If he doesn't make the trip, all the better - absolutely nothing changed about that gameplan with the suspension.  Lehigh's coaching staff had the challenge, and North Dakota State's had no challenge at all.

Spadola could have stretched the field, or at least given the Bison defense one more thing to worry about all there.  I'm sure he would have been creamed over the middle too, just as senior WR Jake Drwal was countless times during the game, but perhaps Jake would have gotten open one or two times with him as a decoy, too, to allow them to keep the game close.

Unfortunately, with the suspension, Lehigh fans are left with this uncomfortable "what if" that will persist for years.  You can argue either way: that the Bison defense would have been too much even with Spadola, or that Lehigh, with Spadola, could have poked just enough holes in the stout Bison defense to squeak out a win.

Sure, in a big game, you can point to questionable calls - the roughing the passer call on DE Ben Flizack leaps to mind - but one call does not make or break a game.

And I didn't even get into the Bison's grinding offense, that ultimately overwhelmed Lehigh's game defensive gameplan.  That the Mountain Hawks forced three turnovers - the first time all year the Bison turned over the ball that many times - was exceptional, but the combination of QB Brock Jensen, RB D.J. McNorton and RB Sam Ojuri were really tough to stop.

I do not know if Lehigh would have still been shut out, would have made the game closer, or even squeaked out a win over North Dakota State had Spadola been able to play.

But with O'Day's sudden, subjective, "thunderstrike" against Lehigh's star wide receiver, we'll never get the chance to know for sure.