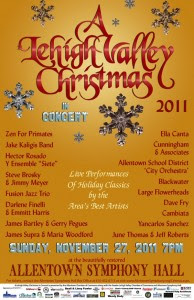 First of all, let me be the first to wish all my readers a merry Christmas, happy Hanukkah, and joyous Holiday season.

And if you're a Lehigh fan, you're probably also wondering what new Mountain Hawk recruits might be needed to continue Lehigh's dominance over "that school in Easton" and also continue their run of Patriot League championships and playoff appearances.

Below the flip, see what recruiting needs would make my Lehigh Valley Christmas even happier.  (Santa, are you listening?)

All six made major contributions and started games for the Mountain Hawks.  I can't think of a departing linebacking class for Lehigh that had as much impact as these guys.

Junior LB Billy Boyko will be a strong candidate next year to step into the large shoes of these seniors, but replenishing this group seems to me like priority one.

3/5ths of the "O" line that allowed senior QB Chris Lum to be a Patriot League finalist, and a host of blitzing "D" linemen that were big disruptive forces on the other side of the ball leave this offseason.

Again, while the cupboard is not bare with junior NG Sajjad Chagani and sophomore OL Matt Lippincott returning next year, Lehigh will need more numbers in the trench this recruiting season.

Dear Santa: Did you find room in your sack for four all-League linemen?


3. You don't just replace a Payton Award-winning quarterback, but crucially, many of the targets that Lum depended on last year are also leaving the program as well.

Senior WR Jake Drwal, the "yin" to junior WR Ryan Spadola's "yang" on the other side of the field, graduates, as does senior WR Jimmy Jefferson, senior RB/WR Matt Fitz and senior WR De'Vaughn Gordon.

Are there other great athletes ready to step in?  Absolutely, starting with sophomore WR Lee Kurfis, sophomore WR Sergio Fernandes-Soto, and freshman WR Josh Parris.  But while it seems like a given that another strong quarterback will get signed by Lehigh - it seems like they do so every year - more important, in my mind, is signing another strong crop of receivers to reload from the massive numbers that leave this year.

Dear Santa: Another tough Jake Drwal-like receiver would be a great stocking-stuffer.

Hope Santa gets you everything you want for Christmas.