Final Ivy and Patriot Thoughts on the Year 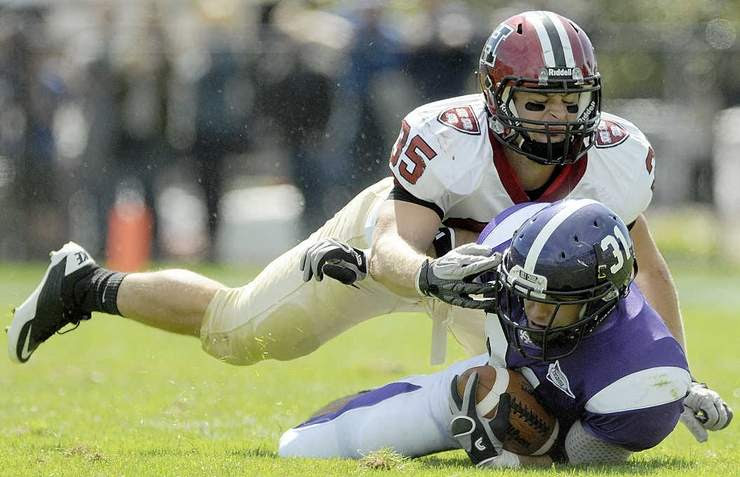 As a Lehigh fan, it was a season to remember - one of the all-time great ones.

Assuming there's no shenanigans, the Mountain Hawks will be enjoying their first Lambert Trophy since 2001, and there's still a great possibility that senior QB Chris Lum's record-breaking season may result in the first-ever Lehigh football player to ever receive the Walter Payton award, the equivalent of the Heisman Trophy at the FCS level.

But before this awesome season comes to a close, two interesting articles came out over this holiday season that are worth reporting before we wax philosophic about the season that was and before we start to announce prospective Lehigh recruits.


The first comes from the Patriot League office, talking about the presidential meeting in Annapolis on December 12th and 13th.

The Patriot League Council of Presidents met December 12 and 13 on the campus of the United States Naval Academy in Annapolis, Md. for one of their two annual meetings.

They met in a joint session with the athletic directors, and participated in a presentation on the current state of the League's member institution's concussion management plans, as well as such related topics as policies on returning to play and the cognitive impact on student-athletes returning to their academic studies. The League will continue to study the topic and present any additional findings or recommendations to the Presidents in June.

Bucknell president Dr. John Bravman, the League's representative on the NCAA Presidents' Advisory Group, reported on the presidents' retreat this past fall, along with the developments from the NCAA Working Groups and the reform movement within the NCAA.


The issue of concussions has been one that has permeated football at all levels, and has prompted rule changes and policy changes everywhere.  Specifically the impact of concussions, especially at a young age, is something that has been taken much more seriously than in years past.

Lehigh head coach Andy Coen specifically has held multiple players out due to concussions this year, so the Mountain Hawks are keenly aware of the issue. I asked him about the policy, and he said that "I believe we have been at the forefront of testing and MHI protocol," referring to Lehigh's athletic-department wide protocol for mild head injuries.  Based on the track record this year, it seems to be the case.

But that wasn't all in the winter meetings:

The Patriot League Council of Presidents voted unanimously against the implementation of the NCAA legislation to provide a "cost-of-attendance" stipend for miscellaneous expenses to its student-athletes and asked the League's athletic directors to continue to monitor the situation. At this time, the NCAA has suspended this legislation until the NCAA Board of Directors convenes in January.

This "cost of attendance" addition to football scholarships, passed in back in August, was the brainchild of Big Ten president Jim Delany, and was (there's no other word) rammed through to approval an NCAA "emergency session".  (The NCAA has no emergency session on superconference realignment, recruiting violations at Ohio State, Oregon or Miami (FL), but THIS merited an emergency session?)

My take when Delany first floated the idea in May was, let's just say, not kind.

"His advocacy of increasing the amount of money paid out to student-athletes - as many as an extra $5,000 per year for upwards of 100 student-athletes in many cases - caused not a few athletic directors to nervously clench their wallets," I said. "Higher scholarship costs would be another huge expense that - as some critics claim - would make the gap between BCS and the rest of Division I a chasm that would be near impossible to bridge. Could that be Mr. Delany's endgame in this proposal? It's certainly a possibility."

After the change was jammed through the NCAA and president Mark Emmert, presidents and athletic directors realized what happened - and balked.


On Dec. 15, the NCAA suspended plans to give athletes a $2,000 stipend for living costs not covered by scholarships after at least 125 schools objected. The higher number of protests allows the organization to immediately put the change on hold.


Related to that, there's another controversial piece of legislation that was also rammed through in August - the plan to change the structure of athletic scholarships:

More than 75 schools are asking to override a plan approved in October to allow multiyear athletic scholarships rather than the one-year renewable awards schools currently provide. That's the minimum number of dissenters needed for reconsideration by the Division I Board of Directors when it meets next month in Indianapolis at the annual NCAA convention. The NCAA announced the change the Friday before Christmas.

Both measures were pushed by Emmert and adopted as emergency legislation after a presidential summit in August.


While this part of the legislation doesn't affect Patriot League recruits so much, it does have a deep impact on the types of scholarships that most FCS schools provide, however.  If football players now have to commit to a four (or five) year scholarship from the time they're freshmen, there are plenty of FCS schools that are concerned that these contracts could be budget-busters:

Boise State called the move a "recruiting disaster" that would encourage a "culture of brokering" and pit wealthy schools with larger recruiting budgets against their less well-heeled brethren, while also obligating schools to long-term commitments that might not make competitive sense.

"There is never a guarantee that the incoming student-athlete will be a good fit for the program and the institution," the school wrote in its override request. "If it is a poor fit, the program is put in a difficult situation to continue to keep a student-athlete on scholarship."

The "problem is, many coaches, especially at the (Football Championship Subdivision) level, in all sports, are usually not around for five years and when the coach leaves, the new coach and institution may be 'stuck' with a student-athlete they no longer want (conduct issues, grades, etc.) or the new coach may have a completely different style of offense/defense that the student-athlete no longer fits into," the school wrote. "Yet, the institution is 'locked in' to a five-year contract potentially with someone that is of no athletic usefulness to the program."

"The current system works. We don't need to get into bidding wars where one school offers a 75% (scholarship) for two years and the other school then offers 85% for three years, etc., etc. This puts the kid into a situation where they almost need an agent/adviser just to determine the best 'deal.' Again, if it isn't broke, don't fix it."

If this becomes the norm in terms of conventional athletic scholarships, it's interesting to think about what might happen with the need-limited aid of the Patriot League.  FBS transfers in general might become more rare as more kids might be tempted to stick it out with a free education (without football) at their alma mater rather than take a chance and transfer to another FCS school.

In the last two years, the Ivy League has produced 108 first-team all-Americans and won numerous individual national championships. Nineteen of its athletes competed at the 2010 Vancouver Olympics, and 10 won medals.

This renaissance in a league known as the Ancient Eight can be traced to something that has nothing to do with sports: new policies that have substantially enhanced financial aid for all admitted students, making it easier to recruit elite athletes, coaches and athletic administrators said.

The Ivy League does not award athletic scholarships, but led by endowment-rich members like Harvard, Yale and Princeton, the conference has spent hundreds of millions of dollars in additional need-based aid — with most of the universities all but eliminating student loans and essentially doubling the size of grants meant for middle-income families.

The article goes on to talk about where the impact was most felt: in so-called "non-revenue" sports such as wrestling, lacrosse, and baseball, where all kids get some aid from the deep pockets of the Ivies but frequently would have to settle for partial packages from "big-time" schools.

Of course, since Ivy League football is the only Ivy sport to not be allowed to participate in a national, NCAA-sponsored championship, it didn't fit the story very well - but it also didn't help that the Patriot League won more games than they lost this year against the Ivy League.  With those two metrics the only ways that Ivy League football can measure itself nationally, it fell short of the Patriot League in all respects.

Certainly, the article has a point - Ivy League football has been helped by their "scholarship everyone" policy.  But it hasn't made Ivy League football world-beaters, either, and unless Penn, Princeton, or Harvard men's basketball makes a run at a Final Four, can it really be called "flourishing"?  It's certainly flourishing in a wide array of niche sports - but what about the sports that are most popular?

And just today, UC Berkeley announced a very similar program to the Ivies to allow "middle-class students" to attend their university as well - meaning the Ivy League's advantage in these sports might not stick around for long.