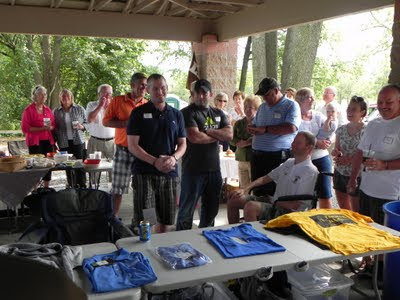 There was no way I was going to miss this tailgate.

When I got the news from Rich Knupp, the director of the Lehigh Athletics Partnership, and Kody Fedorcha, the former Lehigh player and current Mountain Hawk broadcaster, that there was going to be a fundraising tailgate to support the Tackle ALS foundation, I was thrilled to be able to go with my family to support this cause that is near to the hearts of many folks in the Lehigh university and high school communities.

With a goal of raising $10,000 for raising awareness of ALS and ensuring that Lehigh football family member Brett Snyder is squarely focused on beating the disease more commonly known as Lou Gehrig's disease, Brett's friends "blew that goal right out of the water", said Fedorcha to me and others at the event.  (more)
Brett's a hero of mine.

Eight years ago, when he was diagnosed with ALS, then-head coach Pete Lembo broke the news to me and other members of the Lehigh football family, and it was a complete shock.

As a fullback on some of Lehigh's greatest football teams, he truly set the gold standard for other Lehigh fullbacks to aspire to become.  As much for his offensive contribution, his physical play and his blocking downfield paved the way for others to have amazing football careers at Lehigh as well.

But the fighting spirit that Brett showed on the football field at both Northwestern High School and Lehigh University still remain, in spades.

His teammate, Kody Fedorcha, talked about it in a recent report by Keith Groller of the Morning Call:

"The way he played the game, giving it all he had on the football field, people admire him," Fedorcha said. "He's so proud. It's hard for him to admit to sometimes that he needs help from his friends. This disease takes a lot away from you, but the one thing it hasn't taken away from Brett is his spirit."


After being given a mere 18 months to live at the time, eight years later Brett is continuing to show the true grit he showed as a player.  On the Tailgate registration page, Kody talked a bit more about some of Brett's challenges as well:

As the years passed, Brett's challenges changed to facing the most basic tasks at home. These challenges carry a cost that is not just physical and not always covered by insurance, such as home modifications to accommodate a wheel chair, treatments not acknowledged by insurance providers, etc... In short, we cannot fight Brett's battle versus ALS but donations can ensure he is focused strictly on beating this disease.


That's why he's my hero.  I hope I have a fraction of the fight that Brett's shown over these eight years.

And Brett's been a big inspiration to a lot of people in this community, too.

When Tackle ALS, the foundation that Kody and Brett founded, had their fundraiser this weekend before the Lehigh game, I had to be there.  And I wasn't alone - a whole host of his teammates, friends and many others came to his tailgate to raise money, meet with Brett and even see his 1 year old son, Tate, at his side as well.

"It couldn't have been better," Fedorcha said. "We can't thank Rich Knupp of Lehigh University enough. He really did a lot of the setup. We sent out e-mails to all of the alumni and within a day or two, Rich called me back and said 'You're not going to believe this, but we've already raised $2,000 or $3,000. We had a goal of raising $10,000 and we blew that out of the water."


When I talked to Brett, he characteristically didn't talk much about himself.  He was excited and focused on the game - and hoping to be able to watch the whole thing with his brother, former Lehigh WR Josh Snyder, another Northwestern and Lehigh graduate.

"It's always great for Brett and me to come back here," Josh Snyder said. "Time slips by so fast, but when you come back and see so many familiar faces and experience the Goodman Stadium atmosphere again, it's a good feeling.

"We're fortunate to be a part of two tight-knit communities, the one at Northwestern and also the one here at Lehigh. Andy Coen is a guy who never forgets his former players and he's always welcoming us back. He was my offensive coordinator for two years and Dave Cecchini [Lehigh's current offensive coordinator] was also my OC for two years. It's fun to see this offense get cranked up again."

When Northwestern and Northern Lehigh meet on Oct. 14 in Slatington, the two school communities will attempt to raise funds for the Tackle ALS organization and for the Bo Tkach Memorial Foundation.


Coach Coen didn't just welcome Brett back - he also spread the word about the tailgate as well, through his Twitter feed and other methods, in order to raise awareness about his fight.

It was awesome to see so many people show to the event - to see so many friends and teammates there, and to see many members of his teammates as well, who posed for an impromptu "reunion picture" with Brett during the tailgate.  (A full album of pictures I took can be seen on the Lehigh Football Nation Facebook page.)

It was even better to learn later that the initial goal of $10,000 was easily surpassed.

But the best part was seeing Brett's big smile - to me, and everyone there.