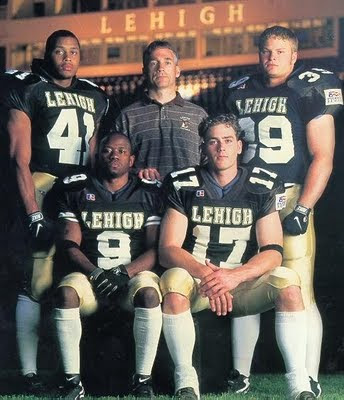 This Monday, the Patriot League announced their 25th anniversary team, and there were some surprises - mostly on the positive side for Lehigh, who netted six spots on the all-time team.

Below the flip, see who made it from Lehigh, and see what I think were the shocking omissions from the list. (more)

From my nominations for the offense and defense of the 25th anniversary team, I picked three Lehigh players correctly.

OL Will Rackley '10, the second-round pick of the Jacksonville Jaguars in this year's draft, was an easy call, a guy that head coach Andy Coen called the "best offensive lineman in my 18 seasons of coaching in the Ivy or Patriot League."

Another guy I picked successfully was another easy one: TE Adam Bergen '04, who was head and shoulders above the competition at the tight end spot - a two-time first team all-Patriot League selection with 70 receptions for 840 yards and six TDs as a junior, and 54 grabs for 634 yards and eight TDs as a senior.  In addition to being the most dominant tight end in league history, he was a two-time member of the Sports Network All-America First team in 2002 and 2003, as well as making the Associated Press' second team in 2002 and first team in 2003.


Bergen went undrafted out of college, but signed with the Arizona Cardinals. He played in all 16 games his rookie year, catching 28 passes for 270 yards and one touchdown. In 2006 he played in 14 games for the Cardinals, recording 15 receptions for 111 yards and one touchdown. He later spent time with the Dallas Cowboys, Baltimore Ravens, and Denver Broncos. In 2009 he signed with the Las Vegas Locomotives in the United Football League. In the two seasons, the team has won consecutive UFL Championships. Bergen also founded and runs a charity, "The 87 Plays Foundation", whose purpose is to reduce budget cuts in school sports programs and aims to provide every child the opportunity to participate in school sports regardless of their financial circumstances.

The third guy I got correct was SS Abdul Byron '01. "Byron became the first Lehigh player to be named to the Sports Network's All-America team in successive years and at the time was the only player to earn the honor twice during his career," I mentioned in my nominations for the all-Patriot League team. (Since Byron accomplished the feat, TE Adam Bergen repeated the feat as well in the 2002 and 2003 seasons.)


For good measure Byron added over 1,000 yards in kickoff return yardage over those two years as well, capping off four incredible years with Lehigh where the Mountain Hawks would amass an amazing 45-5 combined record.


Then there were the three that made the team, but were on my "bubble", and all were defensive players.


LB Ian Eason '00, pictured above with his head coach Kevin Higgins and teammates QB Phil Stambaugh, FB Brett Snyder and FS Kevin Joseph on the cover of the 1999 media guide, was a great pick at linebacker. Eason made the all-Patriot League teams all four years as a starter as a Mountain Hawk, as well as Defensive Player of the year in 1999. It wasn't easy for him to stand out on a loaded Lehigh defense (with players like LB Lance Eckenrode and DE Rich Owens), but he certainly did with his sure tackling. He'd end his career with 372 career tackles, good for 8th best in Patriot League history.


Another dominating member of those teams was DE Nick Martucci '99, who was also a four-year started for the Brown and White. "Martucci was a two-time first team All-Patriot League selection and the league’s Defensive Player of the Year in 1998 when he captained the Mountain Hawks to a 12-1 record and NCAA Quarterfinal appearance," Lehigh's offical release says.

Martucci also added some comments in the Patriot League release:


Our football class ('99) won two Patriot League championships, finished the regular season of our senior year undefeated, won the first playoff game by a Patriot League team and finished ranked 7th in the nation. All of this on field success was achieved by a class with the highest SAT scores in the country our freshman year (including the Ivy Leagues), placed three athletes on the Academic Honor Roll during the undefeated season, had one academic All-American and the Patriot League scholar-athlete of the year that fall. This proves that gridiron success and academic achievement can go hand in hand.


My football classmates include financial planners, vice presidents, engineers, systems analysts, CPAs, entrepreneurs, architects, teachers, college coaches and a doctor. They will always be considered lifelong friends and I will be forever grateful to Lehigh for introducing me to these future leaders and fine young men.

Lastly, LB Matt Cohen '10, another player that coach Coen said was one of the best he's ever seen in coaching collegiately, also made the squad as well.


As a senior, Cohen was named Patriot League Defensive Player of the Year, becoming the first Mountain Hawk since 2001 to record the honor. Cohen finished his Lehigh career with 177 total tackles, 18.5 sacks and 44 tackles-for-loss. Cohen won a league title as a freshman in 2006 and was instrumental in mentoring many of the Lehigh defenders who contributed to the Mountain Hawks 2010 title run. He earned first team Walter Camp and Sports Network All-America honors and was named a second team All-American by the Associated Press.

The current linebacker for the Lehigh Valley Steelhawks also had this to say:


I am extremely honored to be selected to the Patriot League 25th Anniversary Team. The Patriot League has history of excellence in both competition and academics, so to be associated with the League means greatness on and off the field in my mind. My time at Lehigh will always hold a special place in my heart from my teammates and coaches to teachers and other staff and faculty members ...it was the special people that I formed bonds with that I will always remember. What I learned at Lehigh continues to guide me today. Once again I'm very proud to have achieved this honor!


I also wanted to say congrats to all the other honorees and last but not least my parents. God bless!

Congratulations to Lehigh's "gang of six" - all fantastic players to represent Lehigh on this historic team.


There were some other surprises on the team as well.


To me Colgate QB Ryan Vena '99 over Holy Cross QB Dominic Randolph '10, Lafayette QB Frank Baur '90 and Lehigh QB Phil Stambaugh '00 was a mild surprise, but considering the amount of great quarterbacks the league has produced, you can't really have a bad choice.


Nothing was more surprising, however, than the omission of Colgate RB Jamaal Branch '04 from the 25th anniversary team.


A Walter Payton Award-winner, Branch holds the single-season Patriot League record for yardage (2,326) in league history, and was a huge part in the Raiders' 15-1 season in 2003, only losing to Delaware in the I-AA National Championship game in Chattanooga, Tennessee.


The trouble? He was going up against two other Payton Award-winners.


Gamble, a member of the College Football Hall of Fame, was also a no-brainer candidate. "At the conclusion of his career, Gamble held or shared 13 NCAA Division I-AA records and 29 school records," Colgate announced at the time of his enshrinement. "His career 7,623 all-purpose yards set the all-time record for all divisions of collegiate football.