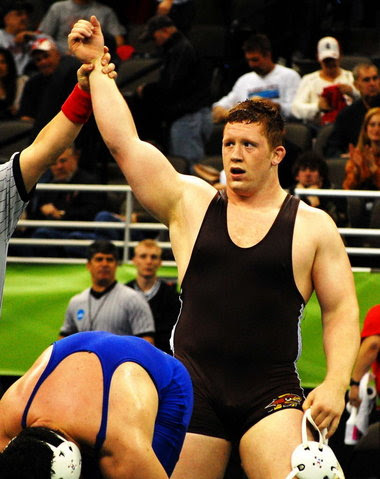 For me, writing about wrestling is difficult.

Not that I don't want to celebrate the individual accomplishment of Lehigh's student-athletes in the ring - I do, which is why I do it.

Not that I don't wish to shine light on Lehigh's nationally-recognized wrestling program, which is one of the Mountain Hawk programs that can realistically expect to produce some of the best wrestlers in the nation.

And one of those wrestlers on this year's team is the No. 1 overall seed in the heavyweight division. As you'll see below the flip, everybody loves heavyweight Zach Rey - from the NCAA to the local papers covering the NCAA Championships in Philadelphia this weekend. (more)


As a guy who focuses on football first, I'm accustomed to covering sports in terms of a team sport. In football and basketball, Lehigh either wins, or loses, of course.

In wrestling, though, while there is a team aspect (that is played up on the NCAA's pre-tournament writeup of the proceedings) but ultimately it's all about individuals.

Going back to Lehigh's top-rated wrestler, it's not so much that Mr. Rey hates, say, Cornell or Iowa, but he could have a rivalry with, say, Penn State heavyweight Cameron Wade in the second round.  I wouldn't know.

What is sure about the wrestler getting the love from the Lehigh fans is that, as the Express-Times wrote about this week, Rey has come a long way from his football roots in Hopatcong, NJ:

"[Entering high school, wreslting coach] Eric [Fajerman] wanted me to see if I could get (Zach) in the wrestling room," Reduzzi said. "He'd never been on a wrestling mat, but he was a big, strong kid – and super athletic. Zach just wanted us to ensure him he'd have time to lift."

Just like that, Rey was the Chiefs' starting 285-pounder and the rest, as they say, is history.
To that point, Rey had never wrestled an organized bout in his life.

"Zach started out like any other freshman," Fajerman said. "I think he was something like 6-15 but won 4 of 6 matches going into districts. He finished second in District 2 (at 285). He was just starting to figure it out."

Figure it out, indeed.

This week, the Mountain Hawks junior 285-pounder is the pre-tournament favorite to become Lehigh's 27th individual national champion at the NCAA Division I Wrestling Championships in Philadelphia.

Rey remains the No. 1 seed even after his surprise loss in the EIWA Championships a couple of weeks ago.

"I don't ever want to say losing is a good thing," said Rey, who's 11-1 this season against other 285-pounders in the bracket. "But the loss lit a fire under me. I think I went into that match (with Flores) a little complacent. I made a couple of mistakes. It made me realize, I have to earn wins more than I've been doing recently. That can't happen at nationals. "

"Seeds don't mean anything, it's how you perform," said Santoro, a two-time NCAA champion at Pittsburgh, "but I think it's important to be seeded at the national tournament because it means you don't have a stud right out of the chute."

Santoro said the Lehigh staff wasn't too concerned about the effect of Rey's loss to American's Ryan Flores in the EIWA title bout.

"He beat [Eastern Michigan's] Jarod Trice and Flores two times. They're the Nos. 2 and 3 seeds, so I guess the seeding committee looked at the body of work."

The brackets (courtesy of Gary Blockus of the Morning Call) show that Rey's path to becoming NCAA champion will be, of course a challenge. After an early bout against Campbell's Parker Burns, Rey faces a potential second-round matchup against dangerous Blake Rosholt of Oklahoma State and a possible Friday morning matchup with Cameron Wade of Penn State.

Oklahoma State and Penn State are aiming squarely at team titles in wrestling, and nothing would be better for the Cowboys and Nittany Lions than to knock off the No. 1 seeded- Rey. And that's before the possibility of facing Flores, Trice, Missouri's Dominique Bradley or Rutgers' D.J. Russo, whom are all possible semifinalists or finalists at heavyweight.

It's going to be an interesting bracket to watch for wrestling fans.

You can catch all the first and second round action by either taking a train to Philadelphia to the Wells Fargo Center, starting Thursday morning at 11:00 AM, or listening to all the action on Lehighsports.com with Steve Lomangino on the call. If any Lehigh wrestlers make it to the quarterfinals, semifinals or finals on Friday or Saturday, those will be carried live on ESPNU.

That's not to say that the other Lehigh wrestlers have no shot at NCAA championships themselves, or the coveted all-American spots that are the goal of every grappler who comes to Lehigh.

One other Lehigh wrestler with great seed for an NCAA championship is Robert Hamlin at 184 lbs, who is seeded No. 2 behind Edinboro's Christopher Honeycutt at No. 1. Hamlin will be looking for his first all-American nod at nationals after losing in both matches at 174 last year.

Hamlin's first bout will be against Missouri's Mike Larson followed by a possible encounter with Rutgers' Daniel Rinaldi, whom he beat 5-2 in February. You hate to look down the line, but if Hamlin survives, a possible rematch against Cornell's Steve Bosak, whom he memorably beat 5-4 in January, looms.

At 174, Austin Meys earned an 11 seed, and will go against Michigan State's Curran Jacobs. Sixth seeded Ben Bennett out of Central Michigan, who beat Meys 1-0 in December, potentially looms if he wins his first match. Second-seeded Ed Ruth out of Penn State, who beat the freshman Meys 7-5 in November, is a threat to become NCAA champion.

Another freshman, Frank Cangina at 133, qualified but starts nationals on Thursday with a murderer's row. If he survives sixth-seeded Tony Ramos out of Iowa, he'll be "rewarded" with a match against Jordan Keller of Oklahoma. Interestingly, if Cangina wins those two bouts, he could earn a rematch against eleventh-seeded Scotty Sentes of Central Michigan, whom he already beat 3-2 in December.

The other Lehigh wrestlers to watch in the first round are: