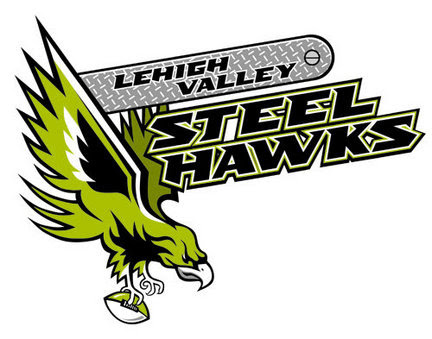 Isn't it supposed to be basketball season?

Well, yes, it is.  It still very much is.  Lehigh's men's and women's basketball teams close out their respective regular seasons this weekend - and we'll find out where they end up seeded in the Patriot League tournament.

But for the first time in a long time around these parts, however, it's also the beginning of a new football era as well.

On Saturday in Reading, PA, the newest member of the IFL, or Indoor Football League, will be facing off against the Reading Express.  That's the Lehigh Valley Steelhawks, who will be headlined by a certain Lehigh football star named LB Matt Cohen. (more)

"This marks the first game in what promises to be one of the fiercest rivalries in the Indoor Football League," the preview of the game says. "The teams are separated by a mere 50 miles. The new rivalry is timely for the Express, which lost its most recent rival, the Baltimore Mariners, with the move to the IFL."

(Say this about the Lehigh Valley - they know a little something about "Rivalries". Which begs another question - can a Rivalry exist even when your team hasn't played a single game yet?)

"The Steelhawks' roster tends to look like a "Who's Who" of past favorites of Express fans. Guys like Isaiah Grier, Marcus Sergeant, Chad Clark and Mores Manoyrine all stand the chance to suit up for the Steelhawks on Saturday. In the coaching ranks, the Steelhawks Defensive Coordinator Kelly Logan is a former Express staffer. This will surely add to the rivalry if they square off against some former teammates on the Express, including veterans Carmelo Ocasio, Matt Sola and Erik Rockhold."

Hopefully someone who will not become a favorite of Express fans is former Patriot League player of the year LB Matt Cohen, who was the subject of an article from the Morning Call's Keith Groller.

He was first a standout running back at Central Catholic, then became an All-American linebacker at Lehigh University.

No matter the level, no matter the uniform color, Cohen excelled and represented his school in classy fashion.

Now, 15 months after closing out his collegiate career with an overtime win over Lafayette, Cohen is set to play football again.

"I'm pumped and ready to go," Cohen said. "Just to play football again, I'm itching. I like this team, I like the guys. It's like a second family to me."

As the season begins, Cohen is the face of the franchise, the one marquee name that's instantly recognizable to area sports fans.

"I could have never foreseen an opportunity to play football here in high school, college and now on a professional team," he said. "I just hope it gets people excited to come out and watch because it really is going to be a great brand of football. It's going to be more exciting than people expect.

"The community is going to take to this. These are good players and good character guys. They were chosen for a reason and when we get out there in the community and meet fans, they're going to like what they see. Everybody who knows me, knows what I am about. It's the same with all of these guys."

There have been other failed attempts to have arena football take off in the Lehigh Valley.  And, quite frankly, I never made any serious connection to the former Arena team that played in Stabler (the Outlawz), simply because there so little linkage between Lehigh University and the franchise. To me, they were just another local team that happened to be playing at Stabler.

But this team is different.  Their "Name the Team" contests heavily involved the local community, and their eventual name - the Steelhawks - really epitomizes the Lehigh valley history in terms of Bethlehem Steel and, well, the Hawks of Lehigh.

And Cohen - nicknamed "The Mayor" by head coach Richard Britt - gives this Steelhawk team a local star through and through to build their franchise around.

With Cohen, they have a guy who is easy to root for - a guy who really paved the way towards establishing the Mountain Hawks as a premier defense in the Patriot League in his four years at Lehigh.

In college, he had a motor that ran every single play.  You could count on him to get one or two big tackles for loss every single game.  The adjective that leaps to mind is "relentless".

And with Cohen on this team - as its main star - it's easy to get excited for a football rivalry.  Yes, even in February.

(It helps that the team colors of the Reading Express look a lot that NFL team that  Jimmy Jones owns.)

The game will be played at the Sovereign Center in Reading, PA.  Doors open at 6:00 PM and the game starts at 7:00 PM.  Tickets are still available, and there may be a live stream of the game available here (I have no details).

Closer to home in the friendly confines of Stabler Arena, the Lehigh Lady Hawks will be playing the very last game of the Patriot League regular season this Saturday at 7:00 PM. The opponent is Holy Cross, and the game will be carried on Service Electric 2 (with Mike Zambelli and Jim Wills on the call) and 91.3 WLVR (with Matt Markus doing commentary).

The game has the potential to be huge.

Navy, who faces last-place Colgate, and American, who squares off against Lafayette, will have played before the Lady Hawks and Crusaders take the court.

If the Mids lose to the Lady Raiders, Lehigh's game will determine the regular season Patriot League title.

The ideal scenario would be to finish first for the regular season championship.  Should the Lady Hawks do that, they would be guaranteed a spot in the WNIT and would mark Lehigh's third-straight postseason appearance in three years.

If not, the Lady Hawks - who sit at 98 in the Real Time RPI rankings - would very likely have to make another run through the Patriot League tournament to get that precious bid to the NCAA tournament.

And that run - if they're the No. 2 seed - would go through Lafayette at Stabler.  It would be by far the biggest storyline of the first round - not only because of the "Rivalry" aspect, but it was the Lady Leopards who delivered Lehigh's most recent regular-season loss at Stabler, a 57-54 defeat.

As if that weren't enough, Saturday's game will also be G Erica Prosser's final regular season home game as a Lady Hawk.  The senior powerhouse on the court (16 points, eight assists in a 72-39 burial of Bucknell on Wednesday to cap off two straight Player of the Week awards) and off (spearheading an effort to raise funds and build a school in Kenya through SALSC, CoSIDA Academic All-American).

Recently, Tom Housenick shared with readers why Prosser was his Player of the Year:

Prosser is an outstanding ballhandler and ballhawk. Ask Lafayette. The Leopards couldn't get into their offense many times Saturday because she was stripping or deflecting a foe.

The 5-foot-7 guard also is quick and loves an up-tempo style. There is no one in this league who can sustain the pace she often dictates when Lehigh grabs a defensive rebound or creates a turnover.

Watching her in transition is a thing of beauty… and a necessity for Lehigh teammates who better be prepared for a laser pass.

But Prosser is that rare point guard who is equally gifted in the half-court set. She utilizes screens very well and has a great crossover to create space and penetrate.

Unselfishness is Prosser's lone fault. She passed up at least six good looks from 3-point range during Saturday's game at Lafayette because the game plan was to pound the ball inside because of the absence of the injured 6-foot-7 Fiacco.

Prosser has significantly more assists than turnovers, even though her teammates struggle at times to catch her bullet passes and league statisticians occasionally have trouble tracking her assists.

With a bit of luck, Prosser will be competing for a third-straight playoff appearance this weekend at Stabler.

Going into Wednesday's game, the task was easy: beat Bucknell, and they are guaranteed the No. 3 seed. Unfortunately, thanks in large part to an early second-half spurt by the Bison, their 72-55 defeat merely guaranteed that this Saturday's game at Holy Cross will be meaningful.

Lehigh's task is easy: Win, and they're the No. 3 seed. Lose, and they will either be the No. 4 (if American beats Lafayette) or No. 5 (if the Leopards beat the Eagles).

Their game tips off at 4:00 PM, and will be broadcast live on CBS College Sports (with Matt Kerr doing the radio call for Lehigh on AM 1230 and 1320). It should provide a thrilling end to the regular season - and will be crucial to ensure that Lehigh gets at least one home game in the playoffs.