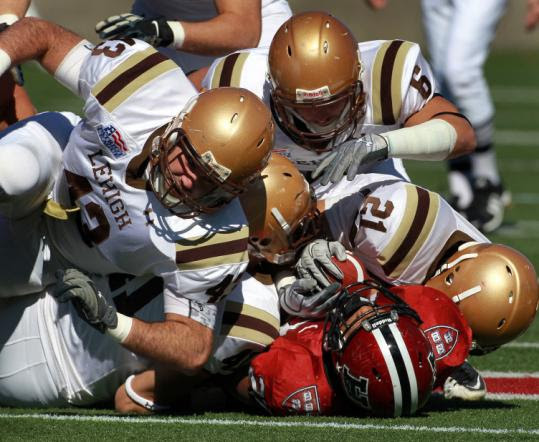 In the live blog penned by the Harvard Crimson, from the first sentence describing the Mountain Hawks - "Fashion check: the Crimson's looking sharp in Crimson jerseys and gold pants. Lehigh looks silly dressed in white-on-white" - it's easy to hate Harvard, and by extension, revel in the victory that Lehigh enjoyed this Saturday.

It's funny how the live blogger at one point messed up who they were playing - "Mike Colvin in at QB for Lafayette. His pass intended for Spadola falls incomplete" - and it was equally as funny to hear the Harvard broadcast team call Lehigh the "Engineers" time and again on the broadcast, when - how long has Lehigh been the Mountain Hawks? A decade? 15 years? But announcers and live bloggers aside, Lehigh got a strong media writeup this week up in Boston and down here in the Lehigh Valley, rightfully honoring the "boys in white" with the gold helmets for their great win.

Oh yeah, and score one for the school that didn't almost singlehandedly ruin the world's economy. (more)

“I want to start by saying how proud I am of our football team and how we responded to a big challenge at halftime,” said Lehigh head coach Andy Coen. “Our first half of football was not very pretty. We didn’t tackle well. We didn’t execute the offense the way we’re capable of. We had to pick ourselves up at halftime. We came out in the third quarter and responded very well.

Coen Continued, “It means a lot to me that we were able to beat Harvard because I have a lot of respect for their football program. It was the kids that did it. Right to the end they kept competing and had a great will to come out with a win. We were fortunate enough to get that done.”

Sophomore WR Ryan Spadola, who became the fourth player in school history to catch 14 passes in a game, was instrumental to the offense's success.

"We had opportunities to make plays in the first half, but we kept shooting ourselves in the foot," Spadola said. "I knew coming out in the second half that I had to work my butt off. When my number was called I just wanted to do everything possible to get that ball and make plays."

Morning Call: Lehigh Made Fans Glad They Stayed for Second Half

Some members from the Lehigh University football fan group known as the "Southside Boosters" who made the trip to Cambridge, Mass., were so disgusted by what they saw in the first half at Harvard on Saturday that they even regretted having to stay for the second half.

Mountain Hawks coach Andy Coen agreed, saying, "That first half was bad as it's ever been."

Not only were the Mountain Hawks trailing the Crimson 17-0 at halftime, but they were playing perhaps their worst football of the season — perhaps many seasons.

"We were embarrassing in the first half and the coaching staff really challenged the kids at halftime," Coen said. "I can't say what I said to them, but it wasn't anything we really changed because Harvard did what we expected them to. It was just that the kids played with great energy and executed a lot better."

Coen said the win was probably the most satisfying of his five seasons in charge with the exception of the two victories over rival Lafayette the past two Novembers.

"It was a great win because it was a great team effort with everyone stepping up their game and it came over an outstanding program on the road," Coen said. "We've been trying to develop a different mind-set from past years and show that we are a different football team from what we've been."

"So many times I had to try to pick the kids back up and get them to fight through adversity coming off a difficult defeat," Coen said. "The challenge now, after such a big win, is how do we deal with prosperity?

"The kids are feeling good about themselves, and they should. But we must make sure we handle this the right way. I will be on them hard this week. We will not be a team that will be overconfident against Bucknell."

“They maxed out the third-quarter wind advantage and they threw the ball extremely well,’’ said Harvard coach Tim Murphy. “We played great run defense and to me, if you can stop the run you have a chance to beat anybody. But they just made some big plays in the third quarter.’’

“They did some things that worked pretty well against what we were doing,’’ said senior FS Collin Zych, Harvard’s captain. “It took us a while to adjust and we paid for it.’’

“We can’t relinquish a 17-point lead like that in the third quarter,’’ said senior DT Chuks Obi, who had nine tackles. “We gave up three touchdowns in the third quarter and that’s unacceptable, and that’s a combination of the penalties and not being able to get to the quarterback with the pass rush, and we’ve got to do a better job of that.’’

Asked if he was surprised that Harvard didn’t attempt to double or even triple team him, Spadola said, “We knew they were a little weak in the secondary and we knew they had starters who were hurt. When that play came up, I knew it was one [safety] high. When it’s one high, then it’s direct to me.

“I saw they were in man coverage with one of their second-string players, so I had to beat him and make sure I had time to get open. Me and Chris were on the same page all week in practice doing that. We’d been consistent with it and it showed in the game.’’

“This was certainly a breakout day for him,” said Mountain Hawk coach Andy Coen. “He’ll be the first to tell you he’s got to keep working. But...we’re obviously thrilled to have him on our football team.”

“I have so much respect for [Harvard coach] Tim Murphy and this football program here,” Lehigh coach Andy Coen said. “I think it’s become a neat little rivalry for us, and we’d love to get back to playing Harvard down the road. So it means a lot to me that we were able to beat Harvard.”

“We gave up some big plays in the run game, largely due to missed tackles,” Coen said. “Senior RB Gino Gordon I think is a fabulous back...he’s proved that here.”

“Obviously [the game was] a tale of two halves,” Harvard coach Tim Murphy said. “I was not unhappy with our effort, but in the end we just did not make enough plays.”

Indeed, from the very beginning of the third quarter, momentum seemed to shift in the Mountain Hawks’ favor.

“I think it first started with the opening kickoff,” Lehigh receiver Ryan Spadola said. “Sophomore LB Jerard Gordon had a huge hit on the returner, and I think that sparked everybody.”

“We just came out in the second half, and we just wanted this game,” Spadola said. “We took advantage of every opportunity, and when our numbers were called...we took advantage and made plays.”

LUHawker said…
Well, the announcers got one thing right - Lehigh does look silly in white on white. How about some brown pants?
7:30 PM

Anonymous said…
and what is wrong with Engineers?
8:21 PM

ngineer said…
Lehigh needs to come out and really take care of business on Saturday from beginning to end. Bucknell will be feeling pretty good about itself after getting its first win and we need to dissuade them quickly that they have a shot. This is the time for building from week to week and moving forward. With good weather, we SHOULD have about 10,000 in the stands. Go Lehigh!
10:56 PM

Anonymous said…
Nothing at all wrong with White on White. Its a really clean, fast look, and brings back really good memories from my HS football days. And now its THE winning look, and we better stick with it on the road.

Anonymous said…
Not looking TOO far ahead, but Bucknell is BAAAD this year. Anyone for a sellout for the Colgate game? Maybe a nice cold late afternoon at Goodman with a game going down to the wire..
5:17 PM