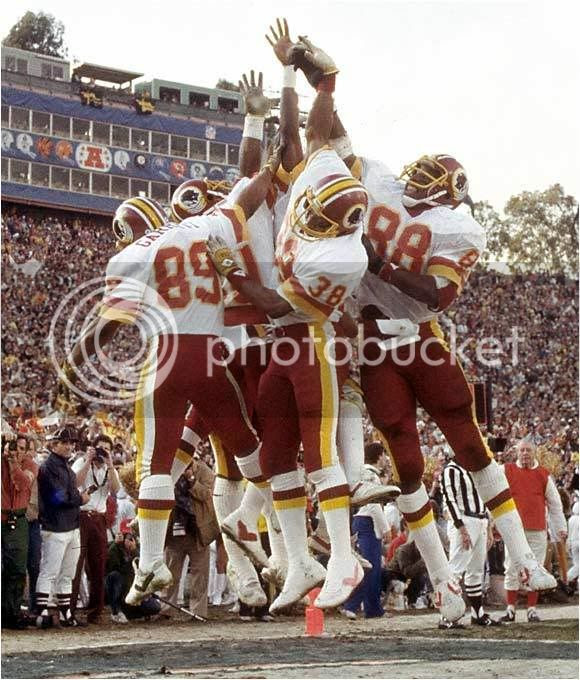 In the NFL's strike-shortened 1982 season, the Washington Redskins had a major setback in their quest for the Super Bowl title: hall of fame wide receiver WR Art Monk was injured, and would miss their run in the playoffs.

His teammates, receivers WR Virgil Seay, WR Charlie Brown and WR Alvin Garrett, along with TE Rick Walker and TE Don Warren, wanted to have a tribute to Monk if they scored a touchdown in the playoffs.  In a game against the Detroit Lions which the Redskins would win 31-7, this "Fun" Bunch performed a choreographed high-five in the end zone after their score.  Fans and media would enthusiastically approve - even if the NFL didn't, and would make their infamous ban on "excessive" end zone celebrations in 1984 - and the "Fun" Bunch was born.

Today, there are plenty of rules discouraging "excessive" celebrations after touchdowns, even at the college level.  But the chest-bump of senior PR/CB Jarard "Main Man" Cribbs after the big 35-22 win over Princeton seemed to channel the essence of this Super Bowl-winning team.  "Fun".  (more)


"My sincere hope is that we will have an environment in which the players will have the best experience of their lives and they will have a lot of 'fun' playing college football. I look back at my own career and it was the best time of my life. My sincere hope is for every player that's in the program right now to look back at their time at Lehigh and feel the same way. It's also my message to our incoming recruits. I'll tell them that if they come here, they will get a great education, win a lot of football games and they will look back at their time spent as one of the most positive things that will ever happen in their life."

Those are the words of Andy Coen, said by the man at the press conference that announced his hiring as Lehigh's head football coach in 2006.  It's the words of a man who is no stranger to knowing the emotion of winning football games.  As a player - as an offensive lineman for the Gettysburg Bullets - he was known for doing a cartwheel after a touchdown to show a coach that he was a bit more athletic that his position coach thought.

It seems to have always been coach Coen's goal to deliver the "fun", but many times over the last few years, it seems, "fun" has been put on the back burner.

Sure, there have been plenty of times when Lehigh has been having "fun" playing football during that time.  The 31-28 win over Villanova in Coen's first year as head coach, in 2006.  The 20-13 win over Harvard in 2007, with the last-second strip-and-scoop with LB Tim Diamond and DE Paul Bode.  The two classic wins over Lafayette in 2008 and 2009, of course, were also lots of "fun" for players, coaches, and fans alike.

But those great highs have been tempered by some tough lows during that time, too.  Two quarterback controversies, in 2008 and this summer, resulted in players leaving the program.  A bunch of excruciating losses were endured - many in the last few minutes of games - and a couple of shutouts at Murray Goodman, too.  All that added up to losing records - and no Patriot League championships, either, which have made nobody happy on South Mountain.

It's hard to overstate how important it was not only for Lehigh to beat Princeton this weekend - guaranteeing at worst a 2-2 record after a daunting September - but also in the way that they won this game.

The football gods threw a lot at the players and coaching staff - more than the casual fan might realize.  Princeton head coach Bob Surace's new fast-break Tiger offense, of which there was no gameday evidence of their schemes going into this past weekend, posed a real challenge for the coaching staff in terms of preparation.  An extremely physical Princeton defense, led by NFL prospect senior LB Stephen Cody, did a number on Lehigh's offense - and was very disruptive early.  Two starting offensive linemen came out with injury, including NFL prospect senior OL Will Rackley, and the starting quarterback, junior QB Chris Lum.  And that's not even talking about the injury to senior CB/KR John "Prez" Kennedy, that slowed him down enough to keep him off the return units, and a host of other dings that could have adversely affected the course of the game.

In addition, Princeton never gave up in this game.  They battled hard - believing, probably, that if they keep it close that they'll get that big play, or Lehigh will make that big mistake, to lose the football game.  After all, that's what happened so often before in September for the Mountain Hawks, and also happened the last two times out as well, in a 10-7 loss in 2008 and a 17-14 loss in 2009.

But Lehigh didn't crumble.  They got better as the game went along.  Injuries happened, but coaches adjusted perfectly and the players did a whale of a job taking care of the football and creating turnovers.  A trick play, the halfback toss-and-pass from senior RB Jay Campbell to senior TE Alex Wojdowski, worked to perfection and swung almost all the momentum back in Lehigh's favor.  And once they had that eight point lead and the momentum, they didn't let it go.

All this against a team that looks to me one that will turn a lot of heads in the Ivy League this year.  This was no 4-6 team that Lehigh faced.  They faced a good team - one with a few breaks might be competing for a title.

And I think "fun" had something to do with Lehigh's victory, too.  This year's team, so far, has not been drama-free, to say the least.  But there is a confidence and a looseness to these players that is easily detected.  From the tongue-in-cheek media day interviews, to gameday, they are having "fun" out there - not in a sloppy way this week, but a good way, filled with confidence.  While fans and media were having "here we go again" feelings after some happenings in the first half, the players were not.  They were having "fun", and getting the win.

And when senior CB/PR Jarard "Main Man" Cribbs sought out coach Coen after the victory to do a "chest bump" celebration - causing, me and both broadcast teams to laugh hysterically when we learned of it - it really drove the point home, at least to me, that "fun" is going to be an important part of this Lehigh football season.

"The night before coach asked the team who loved the game of football," Cribbs told me.  "We realized that not a lot of people get the chance to play football at this level, and we have to take advantage of every opportunity and make the most of every situation and have 'fun' doing it. So coach told the team that tomorrow after we got the win, [we] would be chest bumping all day."

"He actually got up there with me on his vertical," he continued.  I think coach has been doing the teams squat workouts secretly. I hope it continues, I'm already thinking about how to spice up our second chest bump."

"I told him I would do it after the game," coach Coen told the Service Electric 2 TV crew after the game.  "Last year, when I tried it I fell down, so now that I lost the weight, I was actually able to stay up this time."

"We wanted to see how far he could get up there," sophomore QB Michael Colvin added.

Football is a lot more "fun" of course, when you're winning.  But coach Coen - and the team as well, it seems - also seem to realize that in some ways, "fun" and winning are intertwined.  Sometimes, having "fun", like a chest bump after a game, can help win games, just as winning games helps everybody have "fun".  It feeds on itself.

It reminds me a lot of those Washington Redskins in 1982.  A little bit of "fun" helped them achieve an awful lot, too.

Anonymous said…
Not coincidently, that was the year I stopped watching pro football and became a college football fan. I hate the ridiculous "spontaneous" celebrations. A guy tackles a dude after a 25 yard gain and then does a victory dance?
2:56 PM