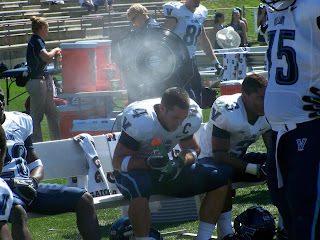 Last year, Lehigh was shut out at home 7-0 against a Yale team that had no business shutting out the Mountain Hawks.

Not even an unnaturally warm summer day could slow down Villanova WR Matt Szczur and the Villanova offense, which would rack up more than 300 yards rushing on the afternoon.

Going into the game, some thought that the Mountain Hawks would be able to hang with the national champs and the team that ought to be the No. 1 team in the country.  They were proven spectacularly wrong by halftime.  (more)


It's easy to think that the Wildcats will be able to dominate other teams this year in a similar fashion to the way that Villanova dominated Lehigh this afternoon.  But that is little solace for a Lehigh team that had opportunities to take advantage of Wildcat mistakes and turn this into a game, but couldn't.

Out the the Wildcat formation, a 30 yard pass by WR Matt Szczur to a wide open WR Norman White - who was interfered with heavily by senior CB Jarard Cribbs, but still came down with the ball - got the party started for Villanova after both teams, in front of an energized Lehigh student section, started out a little flat on offense.  The next play, an 11 yard rush by RB Aaron Ball - following a simply awesome set of blocks on the Lehigh defensive line by OL Ben Ijalana - would be Villanova's first score of the game.

After another set of 3-and-outs, Cribbs made a great break on an underthrown pass by QB Chris Whitney to set up shot on the Villanova 24.  But in a sequence that would sum up the day completely, Lehigh would end up going backwards on a delay of game and a sack of junior QB Chris Lum by LB Marquis Kirkland, setting up a 4th-and-21 from what could have been a golden opportunity to score.  Electing to go for it, Lum threw a pass to sophomore WR Ryan Spadola at the marker that was high, but catchable - but the super sophomore could not pull it down.

Lehigh would get no closer to the 24 yard line of Villanova all afternoon, despite an interception by senior CB John Kennedy and a fumble recovery by senior FS John Venerio that would stop Villanova offensive drives.  While Villanova's bread and butter came from their spread offense and the Wildcat, it was through the air that head coach Andy Talley's team would really kill Lehigh with big plays.  Two huge passes to WR Dorian Wells - one a 39 yard TD and another for 46 yards that would set up an 8 yard TD run by RB Angelo Babbaro - would make it a 21-0 game at halftime, and send the students back to the tailgates.

"You play teams like this, you see them as a great opportunity.  I think when we look at the film we'll find we made too many mistakes, " said coach Coen after the game.  "We talked a lot about limiting big plays, and make a team go the length of the field, and unfortunately we gave up three really big plays that led to scores for them.  When you play a team like Villanova, you have to contain those things, an three's too many in that respect."

There were some positives to be found in the rubble, notably the three forced turnovers and five forced fumbles - though only one was recovered.  Junior LB Mike Groome (8 tackles, 1 sack) and senior FS John Venerio (7 tackles, 1 sack) were a part of the defense that created those chances, while junior WR Jake Drwal (9 catches, 72 yards) and sophomore WR Ryan Spadola (8 catches, 88 yards) also had some flashes of good play, connecting from Lum and getting a rhythm going.

But even when it seemed like some momentum would swing Lehigh's way, sometimes even the crazy stuff wasn't breaking Lehigh's way.  After two nicely executed Lam-to-Drwal connections, a bobbled pass reception ends up in the hands of S Ronnie Akins, killing one great scoring opportunity.  Another time honestly - the umpire got in the way of a third down play, stopping another Lehigh drive.

Overall it was an intensely frustrating day for everyone in Brown & White on Saturday.  Going into the game, every Lehigh fan had the dream of taking the Wildcats to the wire, and maybe even winning the game.  Fans weren't necessarily expecting a win, but they were expecting a hard-fought game and maybe putting a scare into the Wildcats - not getting shut out on offense and getting dominated at the line of scrimmage.

You hate to use words like "dominated", considering it's only Week Two and there is still plenty of football left in the season.  But it does jump easily to mind concerning this particular game.  Lehigh had 8 first downs on the game, with a grand total of 215 total yards of offense and 29 yards rushing.

Having said that, it's really easy to read too much into this one game.  There is plenty of time to learn from mistakes, clean things up, and become - potentially - a championship team.

But you have to go back to 1995 - a 35-14 win over Lehigh by New Hampshire - to find another out-of-conference loss at Murray Goodman that came close to seeing Lehigh dominated like this.  After countless wins and close contests at home against Villanova, Delaware, Harvard and so many others, Saturday's game holds the ignominious record for the worst out-of-conference loss in stadium history.

Defending national champs or not, that hurts.

Every time we loose.

Tired of hearing about Scholarships.

We didn't need them in 2006 to beat teams like the Wildcats.

Thank goodness the rest of the PL teams look like one step above a good High School team this year, or Coen may have been sent walking after this season.

Anonymous said…
We used to compete with scholarship teams, but to be honest, the top scholarship leagues (read CAA and Big Sky) have gotten much better while we have possible gotten worse. Not sure if scholarships are the answer, but I don't see any PL team competing with the elite FCS any time soon.

Blame the coach if you want, but you are missing the root cause. We were not out coached by Villanova. Give us the Villanova staff and give them our staff and the results would be the same.
7:45 AM

Anonymous said…
Lehigh lost to JMU 14-13 6 years ago and Lehigh didn't give scholarships. Scholarships would help, but it's not the total problem. Villanova, Lehigh game in Lembo era drew over 12,000. Lehigh is spending money on other sports not football, just look at the program the last 2 years.
8:55 AM

Anonymous said…
If you are so upset ,write the President and Trustees. You can not have a program without resources. Lehigh's football budget is at the same level as some D-3 schools.
Our US News ranking has fallen from 32 to 37. Gast has been ghastly, Tell them no donations until we see a change. Place the blame where it belongs.
11:08 AM

Main Line Sportsman said…
I was at the game and was so digusted I left at halftime rather than watch any more of this slaughter. I was on Campus to take my daughter to a Legacy recruiting event(which was very good.)She hopes to go to her old man's alma mater...but I was worried that the Goodman Stadium debacle would chill her zeal.
I agree that the program needs to be beefed up with money and better recruiting. I long for the late 90's play-off teams that had all us "Engineers" holding our heads high.
Love your blog/posts and love my Broiwn & White!
3:19 PM

Anonymous said…
Better learn to spell.It is lose, not loose ,which means to untie. Why spend $50,000/yr to attend Lehigh, if you can attend Villanova for free?
LOOKS LIKE YOU DIDN'T ATTEND EITHER ONE
5:26 PM

Anonymous said…
First the good news. The scoreboard was in great shape with easy-to-read numbers and no dead light bulbs. Thanks Joe. Now we await the return of the streaming message line....

Lehigh fans turned out, but 'nova had a small crowd. If this is their fan base, they can never support a big-time program. Better to stick to FCS and enjoy the success.

As for the game -- are we really surprised? Given similar blowout losses by Colgate and HC to solid FCS programs, we can see how far the PL has slipped in competitiveness. Will schollies really solve the problem, or do we have to dig deeper for financial support?

The team -- with Taylor and Campbell already lost for the year, we are seeing more reliance on last year's JV squad. So we are facing another rebuilding year, just like every other year. When do we see the results of all this recruiting?

As for the coaching -- I'm tired of repeating my opinion of Andy and his approach. So are the other people I sat by in the stands yesterday.

At least Lafayette fans feel worse - their team was totally inept against Georgetown (of all teams).
6:36 PM

Anonymous said…
When did we lose Campbell?
6:43 PM

Anonymous said…
Can't wait for the "You never played big time football so your opinion means nothing" rant to come along next. It's sports Bozo. Fans care and fans criticize. That's why the football program gets as much money as they do. If the fans ain't comin' they ain't payin'.
2:13 PM