Patriot League Players Who Would Love To Be "Mr. Irrelevant" Most years, there aren't a lot of Patriot League football players that are hoping to hear their name called in the NFL draft.

Unusually, this year there is one definite NFL draftee (QB John Skelton), another very probable NFL draftee (WR Pat Simonds) and one who ought to be if the folks around the NFL know anything at all (QB Dominic Randolph).

But there are a lot of Patriot League players that hope to follow the path of Blake Costanzo and Rabih Abdullah into the NFL.  Neither were drafted, but got a chance to show their stuff as free agent pickups and made (or are making) a career of playing football on Sundays.

Would any of these guys gladly be "Mr. Irrelevant", the guy who gets picked last in the NFL draft and gets a gag prize package and a parade held in his honor?  Sure.  But they'd prefer to be playing on an pro team - and there's quite a few of them, including one Lehigh player, that should have a shot as the last pick of the draft or as a free agent. (more) 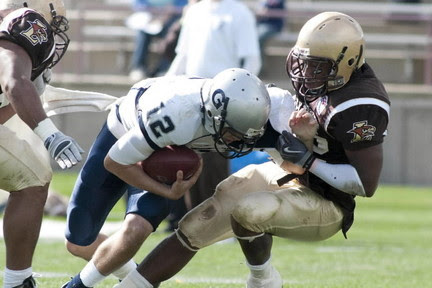 One of those guys could very well be Lehigh LB Matt Cohen, (photo courtesy the Easton Express-Times) whom Lehigh head football coach Andy Coen told me was the type of guy that you see once every "15 years, he was that dominating".

As a member of the Brown & White, Coen knew almost immediately that he had something special in Coen, and after his freshman year spent mostly on special teams he was declared a starter by opening day his sophomore year, where he would proceed to demolish every tackle for loss record in the Patriot League.  He had 44 tackles for loss for his career, including 18 1/2 sacks and 167 tackles.  Incorrectly listed as 5'11 on some sites, the 6'1, 225 lb linebacker has good speed and had a great work ethic on South Mountain.  Of all the players Lehigh graduates this year, Cohen will by far be the toughest to fill.

Cohen has been going to local pro days, hoping for an NFL tryout.  While having an NFL team use a draft pick on him seems like a long shot, his prospects look good to be picked up as a free agent.


On Fordham, while Skelton has been getting most of the hype and press, two of his teammates, OL Andrew Tyshovnytsky and FS Isiejah Allen, have been trying to use Skelton's exposure to get an audience in front of NFL scouts as well.  I've always been intrigued by Allen's raw talent, but for some reason he was never able to translate that great talent into a great college career - though I could see him as a tryout guy for an NFL team, with a shot at playing on special teams.

Tyshovnytsky, on the other hand, has truly wowed some NFL watchers as being a genuine sleeper that could be drafted in the mid-to-late rounds:

He was at Temple's Pro Day, and made everyone else look like high school students. I saw him work out...

He was great in his position drills and agilitly drills. He's smart and a good, disciplined guy and he was 1st team all conference. He would be a STEAL in the 5th round.

Frankly, I'm a little surprised that Tyshovnytsky is garnering so much interest considering that the "O" line that protected Skelton did give up nearly three sacks a game.  But pro day measurables like that are going to get noticed for NFL guys, and it's not just guys on message boards, either, that are doing the noticing:

A pro scout who asked not to be identified was certain he had made a mistake. His stopwatch read 4.91 seconds, but the player who had posted the time stood 6-foot-4 and weighed 317 pounds.

“Guys that big just don’t run that fast,” he said.

So he clocked the huge offensive lineman a second time: 4.93.

The stopwatch wasn’t malfunctioning. Those were Fordham offensive tackle Andy Tyshovnytsky’s times. And they weren’t his only mind-boggling numbers of the day. He also bench pressed 225 pounds 33 times.

“Guys that big that move like that don’t grow on trees,” Dan Mogollon of NFL Draft Bible told The New York Post. “If you can steal a guy like that late in the draft or as a priority free agent, you’ve saved yourself a lot of money.”

I hope he's drafted, and I hope he does well.  If you ask me about his NFL chances - and I realize, you didn't - I'd call Andy a "raw talent" that could develop into a special player on the "O" line.

Other Patriot League players hope to be playing professionally as well.

Lafayette DT Ian Dell and LB Mark Leggerio have been mentioned as looking for a potential free-agent deals.  Leggerio, who led the Leopards in tackles last year with 96, and Dell, with 45 tackles and 7 1/2 sacks from the defensive tackle position, are both tough kids that should get a shot somewhere.  Both are probably considered a bit undersized at their positions - Dell is a 6'2 defensive tackle while Leggerio is a 5'11 linebacker.

From Bucknell, RS A.J. Kizekai  has been looking for potential free-agent deals as well.  Kizekai, who appeared at Temple's pro day, did pretty much everything in Lewisburg, returning kicks, punts, playing running back and receiving out of the backfield and was their biggest offensive threat whenever he took the field.  He should find his way into an NFL training camp as a return specialist.

Georgetown, too, has a guy that some draftniks are looking at as well: RB Charlie Houghton, though the draft folks are talking about is the CFL draft.  As a native of Toronto, Canada, he is eligible to be drafted as a Canadian citizen, and folks see potential in him in that he was the Patriot League Rookie of the Year in 2006.  His injury-shortened career, though, may raise some alarm bells, but if he's healthy I'm sure he could contribute up there in the Great White North.

The Ivy League has some guys that are considered possible NFL draftees as well.  Bookend 6'6 Harvard OL James Williams ought to be drafted, and if he's not teams should have his number on speed dial.

6'1 Penn LB Jake Lewko was a dominating linebacker in college for his Ivy League champion Quaker team, and is being looked at as a priority free agent.

Brown DE Jim Develin (an LFN fave) is a speed-rusher type that could possibly be taken in the late rounds, as could Brown DT David Howard, a guy who came on late last year and has some combine numbers that have made some scouts pay attention.

Brown also has two wideouts, WR Buddy Farnham and WR Bobby Sewall, that are present on some draft boards.  They're speedy, and it's not hard to see one or both of them following the Sean Morey-style path to the NFL.

It should be an interesting draft.