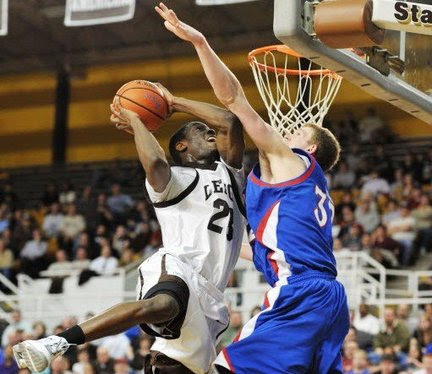 ", the sometime commentator on the CBS College Sports Network said Lehigh was first and foremost "a wrestling school".

With three basketball victories this weekend that weren't even close, the Hawks hoops teams have suddenly and resoundingly put that characterization into question in terms of winter sports.

While this weekend's EIWA wresting championships were somewhat disappointing to the Lehigh wrestling faithful, both the men's and women's basketball teams made sure there will be two more championships coming to Stabler Arena this weekend.  Let's put it this way: buy your tickets - and make plans for early dismissal - on Friday. (more)


While the Lady Hawks on paper seemed ready to cruise through their first two rounds at the Hart Center in Worcester, Mass, in practice it didn't look easy at all.  While the first game against No. 8 seed Bucknell seemed like a gimmie - and largely went to plan, with a 72-58 victory - the second round game didn't seem to offer a break at all.  With their second game in twenty-four hours - against the "home team" Holy Cross in a place which has give Lehigh problems in tournaments past - made for the prospect of a challenging game at the very least.

But after falling behind early 5-2, Lehigh rode a 15-0 run thanks to four 3-pointers - two by senior G Alex Ross, and one by junior G Erica Prosser - and quickly took the fire out of the home crowd at the Hart Center.  While the Crusaders did cut a bit into the Lady Hawks' double-digit lead, in the second half sophomore F Emily Gratch took over with 12 of her 20 points on the afternoon to make the game never really in doubt.  Joining Ross (13) Prosser (12) and Gratch (20) in double-digit scoring was sophomore C Alexa Williams with 12 points and 4 boards.

I’m so happy for the team,” head coach Sue Troyan said in the official release. “The team worked so hard in the regular season to earn the No. 1 seed and to be able to host the title game is a great feeling. Being able to play the championship game at home means so much because we’re very effective at home. I’m just so happy for the team; they put in a lot of hard work, but we’re not done yet.

“I thought our offense really got going early and our post players did a great job handling the double teams. The post did a great job of working inside out and kicking it back to our perimeter players. Alex (Ross) hit some big shots early and it really helped energize the team.”

It seemed like it was destined to be a No. 1 vs. No. 2 matchup in the final, and with No. 2 seed American dispatching Navy 72-47, destiny will be happening this Saturday at 6:00PM to be televised on CBS College Sports Network.  I'll write more about this game later in the week, but it's going to be a great game between two great women's basketball teams.

By all rights, this weekend was supposed to be all about wrestling - Lehigh sporting a top ten wrestling program and playing host of the EIWAs this weekend.  What was poised to be a weekend with multiple EIWA champions ended up not being meant to be, however, as it took until sophomore 265 lb Zach Rey's win in the final bout of the day to have Lehigh avoid getting skunked on their home mats.

With his 2-1 win, Rey was Lehigh's only EIWA champion in the two-day event and only one of five automatic qualifiers to the NCAA championships in Omaha, Nebraska on May 18th.  (Rey, senior 133 lb Matt Fisk, senior 184 lb David Craig, sophomore 165 lb Brandon Hatchett, and freshman 174 lb Robert Hamlin are the others, with senior 141 lb Seth Ciasulli and sophomore 197 lb Joe Kennedy in the running for at-large qualifying spots.)

But if there was any thought that the disappointment of the wrestlers would creep into the game of the men, those fears were quickly put to rest Sunday night.

Certainly American head basketball coach Jeff Jones thought to give his Eagles a chance to win he had to limit Lehigh's guard scoring by playing good perimeter defense.  If so, when senior G Dave Buchburger scored a jumper and a 3-pointer to start the game and senior G Marquis Hall added a 3-pointer, and freshman G C.J. McCollum added an old-fashioned 3-point play to jump to an 11-0 lead, you could say that American came out - at a bare minimum - on the wrong foot.

While the first half featured some turnovers and some seemingly rusty play on both sides, when Eagle junior F Vlad "The Mad Romaninan" Moldoveanu picked up two quick fouls, that's when Lehigh really went to work.  By the time Hall made a beautiful no-look pass to a wide-open junior G Michael Ojo for an emphatic one-handed dunk, Lehigh fans gave the team a standing ovation as the Lehigh players were already starting to celebrate.  Up 39-21 - with Moldoveanu and sophomore F Stephen Lumpkins joining him with two fouls, it just felt like Lehigh wasn't going to let up.

"We wanted to do exactly what we didn't do," American coach Jeff Jones said after the game. "We didn't want to turn the ball over. You're turning the ball over or shooting airballs, you're not forcing them to have to dig down and guard."

“We came out with incredible attention and focus, particularly on defense and we were also able to channel our energy and hit some shots on the offensive end,” Mountain Hawks head coach Brett Reed said afterwards.  “It was terrific to get off to as good a start as we did and I thought our defensive intensity helped carry us through the rest of the game.  Our guys were very excited to play this game and it showed right from the start.”

As if the basketball team needed to get more excited, they had learned already that their opponent in the final would be "that school in Easton", who clawed their way to a 66-63 win against scrappy No. 7 seed Holy Cross.

That sets up a "Rivalry"-themed championship game at Stabler Arena this weekend.  At 4:45 on Friday.  On ESPN2.

Does that mean the Lehigh Valley is now a basketball town?

hawkineer said…
I would say that the wrestling team's performance was dismal. One champion. Very disappointing. Men's and women's basketball were the opposite. Each was dominate. I'll be there on Friday. Guard the three and use superior athleticism to beat the spotted puddy tats.
8:42 PM

ngineer said…
Yes, beating Cornell would have been a miracle, but coming in behind Penn was hard to swallow. However, the Quackers deserved second as they certainly were more aggressive than we were. Too much timidity. If you're going to lose, at least go down firing!
11:36 PM

Unknown said…
Pat clearly stated his "disappointment " with team performance at EIWAs. Very timid by some. Thank God for Bball squads. Geez, I never thought I would ever say that.
8:43 AM

Anonymous said…
The fact that you spend half your article talking about wrestling, debunks your 'thesis' that Bethlehem is now a basketball town. And if this was a basketball town you would spend the whole post on the coming insanity of Lafayette-Lehigh... ON ESPN2 (that national sports channel that's on in every bar). The only 'baseketball fans' in Bethlehem are those that filled your arena to barely 20% capacity to watch the number one team in the PL and the league's "best player." It's March Madness season! It's not even close which sport should be the priority... you win the basketball tournament and you appear on CBS... everyone knows who you are instantly. It's unfortunate that the Lehigh people do not realize this fact.

LUEngineer said…
Give me a break LFN! Basketball will not overtake the great tradition of wrestling at Lehigh. Basketball attendance was not even 1/2 that of wrestling and never is. Did Lehigh have a great tournament---No--but no one expected more than one EIWA champion in the first place contrary to your article. Lehigh will send 7 men to NCAA's before it is done.

The wrestling team ranked #7 in dual meets and so where is the basketball team ranked---#150 or something like that.

Quit trying to hype basketball at the expense of wrestling unless you want the wrath of the wrestling community to come down on you. Lehigh is a wrestling school first and foremost and will always be such. Winning the Patsy League in basketball is like beating Princeton in Wrestling. Don't overplay your hand and the two sports can coexist without a fight.
12:03 AM

Douglas said…
Aren't the students still on spring break???? I think they are lucky that they are playing Lafayette so there will be a decent crowd with half coming from Lafayette where basketball is their real winter sports tradition... The problem for guys like Chuck is that he went through Lehigh when wrestling was in a down cycle.... Patriot League basketball is a rush towards a 15 or 16 seed.. that's it... the Pat League got lucky a couple of years back with Bucknell winning a few games.... the Lehigh wrestling team competes with large state schools nationally.. Basketball is in a different league... Local fans understand it... I think one reason EIWA attendance wasn't more was competition from local high school events both in the Lehigh Valley and New Jersey..

I'll watch the Lehigh game on ESPN on Friday but have no doubt that the Lehigh season will probably end... the only question is will they have to play in or not???
11:53 AM