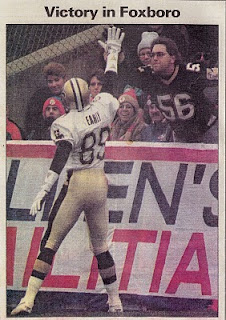 The picture to your left is me, on November 8th, 1992.  Fresh out of Lehigh and working in Connecticut, I paid a visit to my grandparents up in Marblehead and that afternoon took in a Saints game.

The Jim Mora-led Saints were well on their way to another postseason appearance at this point.  At 6-2 - and only with losses versus the powerhouse Eagles and 49ers at this point in the season - the trip to 0-8 New England promised to be a pleasure trip right before a brutal trip to San Francisco.  For a Saints fan like myself, it most definitely was.  (more)

The Saints defense - the cornerstone of these teams in the 90s, the "Dome Patrol" of Vaughn Johnson, Pat Swilling, Rickey "I Was Lawrence Taylor Before There Was A Lawrence Taylor" Jackson and Sam "The Best 5'11 Linebacker In History" Mills, sacked Pats backup QB Tommy Hodson 5 times in a 31-14 rout.  The Saints "D" held the injured Pats offense to 122 TOTAL yards and a grand total of SIX first downs while forcing four turnovers - and former UMass head coach Dick MacPherson didn't even make the game either after being hospitalized for diverticulitis the Wednesday before the game.


This picture was taken after Saints WR Quinn Early caught his second TD of the day, a 39 yarder right before the end of the first quarter.  After I high-fived him, he slipped on the frigid concrete around the stadium and fell on his butt, but that didn't stop the celebration - or the inevitable rout.

The rest of the story involved MacPherson stepping down at the end of the '92 season, and getting Bill Parcells and No. 1 draft pick QB Drew Bledsoe the following year - the first step towards the long road to their inevitable Super Bowl.  The Saints would follow their 12-4 regular season with a 36-20 loss to the 49ers: their third loss to hated San Francisco on the year, and they started their long slide back to laughingstock by the time Mike Ditka would wash up down there.  (Ironically, one of Parcells' eventual proteges would be Sean Payton out of Eastern Illinois - who has the Saints currently on the path to the Super Bowl.  Funny how things turn out like that sometimes.)

I'm looking at this again, and I'm thinking: Does the NFL even allow this sort of seating this close to the field anymore?  Modern stadiums keep players as far away from the "rabble" as possible - rightfully so, too, for the safety of their players.  Still, cool scenes where a fan can connect with the player *during the game* like this  are lost forever - and even if they did still happen, the NFL would probably dole out some hefty fines as well.

I'm ready to enjoy the Super Bowl tonight.  This long-suffering Saints fan who has waited 26 years for this is ready for the evening.  Making gumbo for tonight would be too obvious; etoufee is on the menu.  But the same worn-out Saints Izod shirt will be worn tonight, and I'm guessing that I won't be sitting down too much tonight.  So despite the hype and everything else, I'm going to do my best to keep the same streaks alive to help the Saints win tonight - wearing the same shirt, not sitting on the couch, that sort of stuff.

Some folks (and I know who they are) think it's hypocritical to "root" for two NFL teams, but I don't have a huge problem with it.  As I've gone through great pains to explain, while historically I've rooted for the Saints the Eagles have such a close relationship with my alma mater that they gradually earned my respect and my admiration.  I root for both the Saints and Eagles to do well - but, as I've gradually discovered, when push comes to shove I do end up rooting for the Saints first.

Speaking of which, I think one of the most underreported stories of this Super Bowl is the stark contrast between the two fan bases of the Colts and Saints.  The Saints have Bourbon Street, Emeril, Cajun cuisine, voodoo, jazz, Fat Tuesday, Mickey "Angel Heart" Rourke, Hurricanes and hurricanes.  Let's face it - even their legends have legends assocated with them.  New Orleans - and Saints fans in general - are the very definition of colorful.

Indianapolis has the 500, milk and frozen custard.  You couldn't invent a less colorful fan base if you tried.

Add to that the history of the Colts since the start of the Super Bowl.  Before the Yankees, there were the Colts: with Johnny U. running the team and the biggest, baddest team in the NFC before the Jets took them apart in Super Bowl III.  After becoming the poster children for "heavily favored Goliath going down to David", they then became synonymous with owners' greed as they drove their trucks in a snowstorm to Indianapolis.

Now - in today's game - they're both.  They're the vanilla Colts, led by Peyton Manning, heavily favored to win and really expected to blow New Orleans out.  The pre-game blather isn't about how the Saints can stay in it: they're wondering if the Saints even deserve to be on the same field as the Colts.  The Saints are all colorful fans.  The Colts (and their fans) are boring, but they do have Peyton.  And therefore, the Colts will win.

It's not the time right now to talk about the shoddy treatment by Eagles fans of Donovan McNabb or the inevitable failure of Kevin Kolb as the Eagles' starting QB next year.  It's Super Bowl time.  And I think the Saints have the Colts - and the rest of the country - right where they want them.  I think most of America think the Saints are a bunch of party boys, just happy to be in Miami and that - deep down - they don't deserve to be in the Super Bowl.  And that will be just fine with Sean Payton.  He and QB Drew Brees will ride that underdog, no-pressure situation to a victory.  A big one.

Anonymous said…
Cool article you got here. It would be great to read more concerning this theme. The only thing it would also be great to see on this blog is some photos of any gizmos.
Jeff Trider
Phone jammers
5:22 AM