A Wednesday All About the Bison 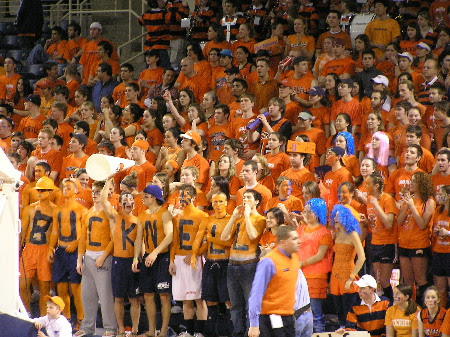 Perhaps it was inevitable on an evening where Lehigh's men's and women's basketball teams would need to guard against letdowns against Bucknell that some big football news would also break from Lewisburg: that Rutgers assistant Joe Susan is reportedly going to be named the next Bucknell head football coach at 6PM today - just an hour before the men face off against the Bison at Sojka Pavillion.  (Home of the Sojka "I Hate Them" Psychos, pictured to my left.  Seriously.  I do.)

The announcement of the hire concludes a delicate month-long dance after former head football coach Tim Landis accepted a coordinator position at San Jose State.  But in taking their time, it sure seems like Bucknell got the right guy for the job.  (More)

For those of you that don't know, Rutgers head coach Greg Schiano is a former Bucknell coach, and Susan was one of his original assistants when he was hired eight years ago.  It's hard not to see Susan as Schiano's right-hand man during the spectacular rise of the Scarlet Knight's program - and as recruiting coordinator, as well as tight ends coach and assistant, means he was the architect of the pipeline that has brought Rutgers from laughingstock to BCS contender.  Why would Susan give that up?

"I wanted to be a head coach again," said Susan, who is returning to the school that launched his coaching career in 1981. "You look at the average age of guys getting head jobs and the opportunities just get fewer and fewer. It's not easy leaving Rutgers. I'm so tied into the school. But this a great opportunity for me."


Not only does he have Rutgers ties and a resume that schools would drool over, he also has experience as a non-scholarship head coach, too: at Davidson in 2000, he guided the Wildcats to a 10-0 record and their only undefeated season in school history.  (Granted, it was a I-AA independent schedule, but it did include five victories against I-AA opponents, including a 41-17 thrashing of Georgetown in their final year in the MAAC football conference.)

Susan was offensive line coach at Bucknell from 1981-88, when he took on the added responsibility as associate head coach for two seasons with the Bison. During his tenure at Bucknell, he recruited Rutgers head coach Greg Schiano to play for the Bison. Susan also recruited offensive lineman Jay Butler, who is presently the Scarlet Knights' Assistant Director for Strength and Conditioning.


And add to this the message board chatter, where folks like "GMoney89" positvely gush about Susan's time in Lewisburg last time:

I've known him since my days in Lewisburg and always thought of him as intelligent, cerebral coach. If you look at his coaching resume, all of the stops along the way have been with Academically minded institutions (even Rutgers, with a top API in BCS schools) so I don't think the "bigger" BCS challenge is in his future. I think the challenge to restore the Bison to respectability in the Patriot League is perfect for him.


All in all, it looks like a great hire for the Bison.  With his contacts at Rutgers and his reputation as a recruiter (especially in New Jersey), Bucknell seems to have sent a message that they want a winning program.  If there was any thought that the Bison might de-emphasize football or would be giving up competing in the Patriot League, it would seem that those thoughts should be laid to rest.

Since I was over on the Bucknell message board anyway, it was simply too tempting to look at their thoughts on the upcoming Lehigh game as well.  Speaking of gushing....

JPM: Having watched several LU games this season, freshman G C.J. McCollum is not only the best frosh in the PL, he may be the best player in the entire league...

Bison137: LU presents more matchup problems than other other PL teams... Huge game. A BU upset would put them right into the middle of the standings while a loss would bury them in the second division. I'm hoping for a win but expecting a double digit loss. Hope I'm wrong.


From the Lehigh (13-7, Real Time RPI: 173) perspective, the Bucknell game (7-14, Real Time RPI: 308) sits uneasily in between the emphatic 75-57 win against archrival and former first place team Lafayette and a big game on the road against a Holy Cross team that seems to always have their number in Worcester.  Adding to the agony is that since the beginning of Patriot League play, Bucknell has dominated Lehigh at home - try 17-3, though two of those games were at Sojka Pavillion.

But on paper, this looks like a good matchup for Lehigh in this Wednesday's game at Sojka.  Since losing a close 104-98 game to a great team in Cornell last December, the Bison have only eclipsed the 70 point barrier three times.  (A particular lowlight was a 49-43 loss to lowly Dartmouth.)  Still, Bucknell is tough due to their presence inside (with senior F Patrick Behan and freshman C Mike Muscala, averaging more than 9 rebounds a game between them) and steady point guard play (from senior G Darryl Shazier, 10 ppg and 4.6 apg).   If Behan, Shazier, or freshman G Bryson Johnson (9.9 ppg) get hot, Lehigh could be in for a rough night, but if "Jay-Zee" (freshman G C.J. McCollum and senior F Zahir Carrington)  can keep up the torrid pace they've been keeping these past few weeks, and if senior G Marquis Hall ("Q", for those scoring at home) can keep up his stellar play the past two games at point guard, Lehigh should come away with the victory.

The game starts at 7:05, and can be heard worldwide on Lehighsports.com (with Jeff Tourial on the call).  If you have the Patriot League All-Access package from CBS College Sports, video is also available.

At Stabler tonight, the Lady Hawks (17-3, Real Time RPI: 72) look to win their fifth straight and their 28th straight home game as they face off against the Lady Bison (5-12, Real Time RPI: 314).  Lehigh comes off their own 66-51 drubbing of Lafayette last Saturday at Kirby Field House, where Lehigh tore the nets with 46.3% shooting and eight Hawks on the score sheet.  Sophomore C Alexa Williams, junior F Courtney Dentler and junior G Erica Prosser all scored in double-figures.  Dentler, who came off the bench, really put the dagger in with two big 3 pointers.

Key to this game could be C Alexa Williams' defense vs. Novacek.  If she can shut her down - and G Erica Prosser keeps doing what she does at Stabler - it could be that Lehigh will be continuing their impressive streaks going into this weekend.

The game starts at 7:05, and can be heard worldwide on Lehighsports.com (with Matt Kerr on the call) and seen on Service Electric 2 in the Lehigh Valley (with Rich Zambelli and Jim Wills on the call).  If you have the Patriot League All-Access package from CBS College Sports, video is also available (which is actually the SE2 feed).