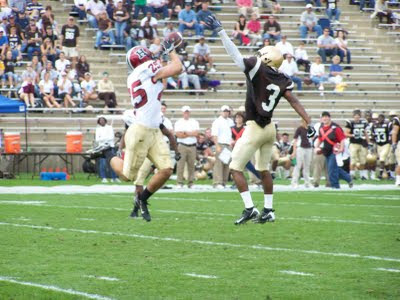 I'm developing an uncanny knack for taking pictures that, unfortunately, tell the story of Lehigh games in 2009.

This one came late in the first quarter, with Lehigh holding a 7-0 lead and - by any measure - had some serious momentum in the early going. Against the heavily-favored Crimson, Lehigh had their first lead of the year, thanks to an opening drive sparked by a 55 yard run from freshman QB Michael Colvin and finished beautifully by an across-the-body touchdown pass by sophomore QB Chris Lum to junior TE Alex Wojdowski.

After the defense forced a three-and-out, Lehigh was in a position to really put the screws to Harvard. Out of the wildcat, the ball went to Colvin, flea-flickered back to Lum, and lofted downfield - an attempt to capitalize on the positive momentum that was created.

Instead - well, my picture tells the story. Harvard senior SS Ryan Barnes was not fooled, and grabbed the momentum from the Mountain Hawks with what would end up being the key interception of the game.

"We has some opportunities for some of these guys to seize the moment, but they did not," coach Coen said in the post game press conference. "My history is that the kids enjoy an up-tempo game, and things can build with that. The game plays faster when you do that, and you don't have to worry about a lot of other things. It doesn't work, though, when you're turning the ball over and giving up sacks."

After the first turnover, things weren't quite the same. You could feel the air coming out of the balloon even then.

Harvard senior RB Cheng Ho made some plays after the interception: ripping off two 13 yard gains, the second of which would become the Crimson's first touchdown on the afternoon. Ho would end up with 132 yards rushing, his best-ever rushing game. Going into this week, his grand total was 8 rushing yards.

Lehigh would get the ball back, and then give up a sack, an illegal procedure penalty, and then another interception - which junior QB Collier Winters then turned into a 3 yard touchdown pass to junior WR Adam Chrissis. Harvard would go up 14-7, have seized the momentum of the game, and never trail again.

After Harvard's go-ahead touchdown, Lehigh's offense couldn't get a lot of positive forward progress. One first down and two three-and-outs later, and Harvard driving to try to score, Coen would elect to go into the half with all three time outs rather than make an attempt to save some time for a stab at a score - even though Harvard would get the ball first in the second half. As it stood, the defense made a big stop - and Harvard would miss a 36 yard FG attempt - but Coen elected to take a knee and take their chances in the second half instead.

The defense battled gamely, with senior SS Jesse Sanchez picking a wounded duck in the corner of the end zone to stop one Harvard drive, and senior LB Al Pierce, in his first start of the year, coming up with a bunch of punishing hits with his 10 tackles and 1 sack. Sophomore DB Colin Newton also came up big with 10 tackles, 1/2 sack, a slew of quarterback hurries and two passes defended.

But Lehigh's offense tried hard to regain momentum but couldn't deliver against a Harvard defense who was in Lum's face all day. Harvard senior LB Jon Takamura would lead the charge with 7 tackles and 1 1/2 sacks - and ultimately would return an interception for a "pick six" that would put rest to any thoughts of Lehigh taking this game.

I don't blame Lum for the pick six - who at that point was trying to force stuff up trying to make a play. This game was lost well before then.

Anonymous said…
The heavily favored Crimson, my how things have changed.
1:43 PM

Anonymous said…
2nd week in a row that a linebacker has returned an interception for a TD. Both times LU quarterbacks had the angle and forced the player to run wide, yet no LU receivers or running backs could catch a linebacker. how slow are LU skill players!
4:16 PM

Anonymous said…
its a very very slow ball club. They don't pay much attention to detail when they recruit. Nothing like the previous coaching staffs.
4:18 PM

Anonymous said…
Ever been on a recruiting trip with a Coach?...didn't think so.
5:22 PM

Anonymous said…
I thought the play-calling the past few years was bad. The past two weeks it's been the worst ever -- at any level. When you average 3.8 yards per carry, as Campbell did, why not run on first and second down and settle for third and three or four every time? Everyone in the stadium knows Colvin is running the ball when he gets it. The Wildcat is built on surprise. Where have shuttle passes gone? Andy, if you want to keep your job and win some games, get rid of the OC now and call your own plays. This team can be very good. If you ARE calling the plays, it's time to resign.
8:40 PM

Anonymous said…
Coen's contract apparently ends at the end of this season.
It amazes me that I read headlines like; "Coen unfazed by 0-4 start" If this is the mentality and culture being accepted in the athletic Departmnet of this University, the change needs to happen before the end of the season to send a clear message that our proud tradition will not be taken so lightly.


Every post game interview is the same thng, this guy is grasping at straws and has no idea how to turn things around.

It's embarassing to listen to him struggle.
8:41 PM

Anonymous said…
I think Andy needs to call his own plays and just go nuts the rest of the season. Fire a few guys and bring in some new blood now. This team is not as terrible as they look. I think Andy saying he is unfazed means he is fazed, what do you want hin to say?
9:36 AM

Anonymous said…
How about Andy saying these words; "I'm stepping down"?

I also think Andy was calling the plays on Saturday, or at least had a lot to say about what was called.

You guys will just keep coming up with excuses for this guy until he runs this program completely in to the ground.

I'm so tired of hearing excuses for the last 4 years.