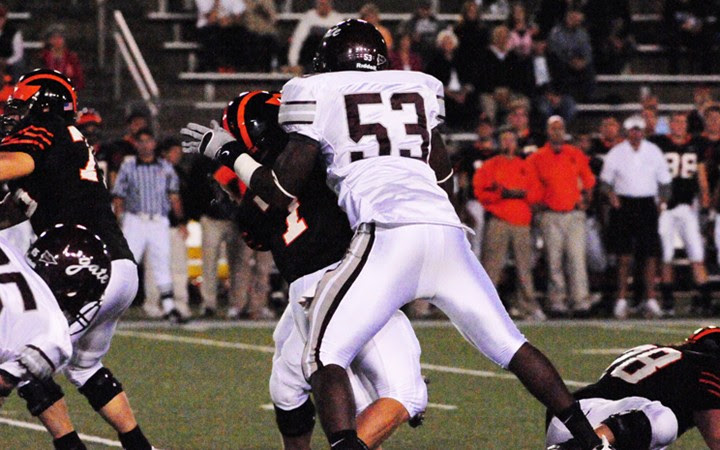 Unless you've been living under a rock, you've probably figured out that the Yankees and Phillies will be facing off at Citizen Bank Park for a double dip this weekend (Series tied at 1), and the hated Giants come to the Linc to face the Eagles for first place in the NFC East.
While the composition of the Lehigh student population is most likely split down the middle when it comes to fan allegiences in these two series (I have an annoying number of fellow Lehigh alums that are also Yankee fans), there's another Pennsylvania/New York grudge match happening as well this weekend.
This one is happening in Hamilton, New York, as the Mountain Hawks and Raiders will face off for the 48th time in their history.
It may not involve the same level of hatred as the Giants and the Eagles, but it's damned close - and it feeds from that Pennsy/Noo Yawk thing, too. It wasn't coined "Hate the 'Gate" week by LB Matt Mohler a few years ago for nothing.
Lehigh and Colgate own or share fourteen Patriot League championships. They own six of the seven postseason wins in the FCS playoffs of the Patriot League. (Fordham has the other.) When it comes to academics, football and playoffs, Lehigh and Colgate are always in the conversation to prospective students, and they recruit many of the same players. For example, RB Matt McGowan out of Hazleton went to Lehigh, and the next big back to come out of there is now suiting up for the Raiders.
Lehigh leads the series against Colgate 7-6 since Dick Biddle became Colgate's head coach in 1996. Andy Coen is 2-2 against the Raiders. There have been blowouts and some high-scoring affairs, but most have been close. And many times, Patriot League title hopes have been on the line, which has made for intense football games. These Halloween games have been treats to watch.
Last year, a heartwrenching 34-33 by Lehigh was simply par for the course this series. Some missed extra points - a Raider drive in the final two minutes - and testy words after the game between coach Coen and coach Biddle defined this loss as Lehigh's losing season was clinched and Colgate's drive to yet another Patriot League championship remained intact.
This year, though, against all odds 2-5 Lehigh's in the thick of this title race with an expected 2-0 sweep of Georgetown and Bucknell. And No. 25th-ranked Colgate - who was undefeated before falling to 7-1 last weekend - is a 1-1 in the Patriot League, and desperately need a win to either get another Patriot League title or qualify as an at-large team in the playoffs.
While the past has seen two teams on the path to titles and playoffs, this year the game has the feel of two teams desperate for a huge momentum boost. A win here for Colgate gives them a boost to surge to a title, and a win for Lehigh turns around a season that seemed to be nearly off the rails. That makes for a compelling matchup - and it's also got that Pennsy/Noo Yawk thing, too.
For both teams, it's go time in Hamilton.
Game Notes
The game notes show one big change for Lehigh: another freshman being asked to start. Freshman K Jake Peery jumps ahead of junior K Tom Randazza on the depth chart after Peery replaced Randazza after a missed extra point and a blocked extra point last weekend. In addition, freshman TE Jamel Haggins, who picked up that blocked kick for a two-point conversion, was elevated to second TE as well. I'd still imagine we'll see junior TE Alex Wojdowski and sophomore TE Mark Wickware play in any case.
On defense, sophomore LB Colin "The Final Piece of the Puzzle" Newton returns after getting injured early against Bucknell, while sophomore LB Tanner Rivas backs him up instead of the injured junior LB Ben Flizack.
Colgate's game notes can be found here.
Weather Report
It shouldn't be a snowy day in upstate New York - but it won't be pretty, either. The current weather report is calling for a 50% chance of showers and a high of 59 - with possible 20 to 30 mph winds. For the third straight week, weather could be a factor in a Lehigh game.
A Word on Colgate
The rivalry between Lehigh and Colgate has come a long way from the first game in 1922, which was played in Johnson City near Binghamton, NY. It was set up by William Fisher, the athletics director of the Endicott-Johnson corporation, and Lehigh's athletics director at the time, H.R. Reiter. The New York Times reported that the game "will be of great interest to all Central New York and Pennsylvania, and will probably result in an annual contest in Johnson City."

Although the yearly meeting in Johnson City wasn't meant to be, both national powers at that time battled fiercely, by account of the New York Times. Lehigh center "Wild Bill" Springsteen recovered a fumble for a touchdown to go up 6-0, but the Maroons (as they were then called) piled up 35 unanswered points to win that inaugural game 35-6.

In the modern era, former Lehigh head football coach Fred Dunlap, who was a star football player at Colgate, helped get the Raiders and Mountain Hawks together in the Patriot League. He saw how similar Colgate and Lehigh were in terms of academics and athletics. And when the Patriot League formed in 1987, it was natural that Lehigh's northern rival be included along with Holy Cross, Lafayette, Bucknell, Lehigh and Davidson.

More recently, this game has generally featured prominently in the battle for the Patriot League title, which has brought this historic rivalry into sharper focus. Since 1997, Lehigh or Colgate have been either outright or co-champions in every Patriot League title. One of those games featured another sophomore quarterback: QB Sedale Threatt, in his second start in relief of injured starter Mark Borda, who helped drop 50 on the Raiders in a wild 50-34 victory in 2005.
LFN's Drink of the Week
It's not for the faint of heart, but in a day where we need the (formerly known as Red) Raiders' title hopes to "die", we need some Red Death to help them on their way. Vodka, Southern Comfort, Amaretto, Sloe Gin, Triple Sec - and oh, yeah, some Orange Juice and Lime Juice - one of these, and you'll be plenty ready to take on wind and rain.
As always, drinks of the week have a place in responsible tailgates: that means being over 21 and drinking responsibly. Don't make me hunt you down and show you the other meaning of Red... well, beatdown.

ngineer said…
I know what you mean. On paper and history, Colgate should win by two scores. But something tells me we get a few breaks, like special teams and turnovers, while holding down ours. Last week was a boost of confidence and the Brown defense will maintain their stable play. A rainy day, as well, will finally provide something positive for Lehigh. I take a drag of the same 'stuff' and say Lehigh, 24-20.
10:11 PM