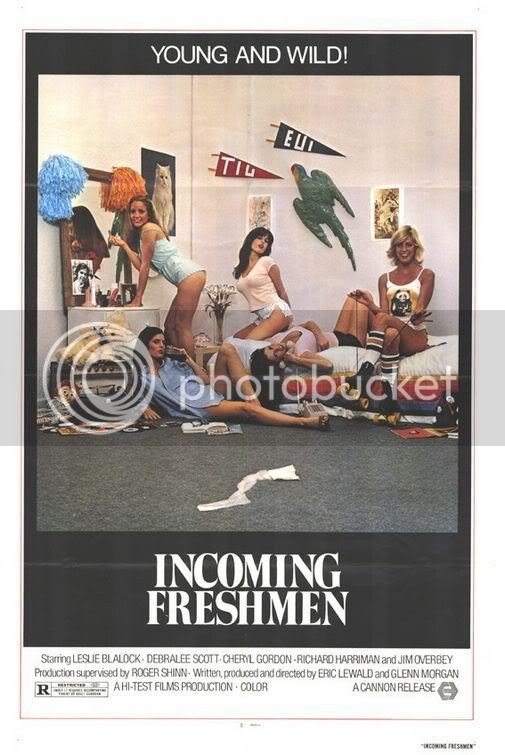 I somehow don't think that the Lehigh experience for freshmen will be anything like the 1979 not-so-classic movie (starring, posthumously, the very talented Leslie Blalock, who was clearly shafted of the Oscar from Sally Field in Norma Rae - union organizer, shmunion organizer - could she skate like that? I think not!). But as the incoming Lehigh freshmen come to South Mountain today, find out their residences, go over their class lists and textbook lists, and find out about fraternities and sororities, it's time to have them get to know about what's REALLY important: being a Lehigh football fan.

I never had a primer like this when I went to Lehigh back in the day. So to you, incoming Lehigh freshman, I present a list of what it means to be a Lehigh football fan.

* Know the Nation. Know first that of all the college fan nations out there, Lehigh's fan nation was the very first. Sure, while Gator Sports Nation, Nova Nation and all those Johnny-come-latelies are quaint and everything, they run second banana to the fan nation represented by this blog, run by me since 2003.

Inspired, obviously, by Red Sox Nation (a term first used by Boston Globe sportswriter Dan Shaughnessey to describe the far-flung Bostonian fan base) it was me who first thought to narrow the tribe to those that love their university and those that love their football. That inspired me to start this independent blog about my alma mater, and I've been writing about Lehigh football ever since. And unlike many of the corporate branding opportunities I've inadvertently spawned, my voice is still one as an independent observer of Lehigh football.

* Start Hating Lafayette. Even on your first day at school, it's not too early to start to develop an unhealthy loathing for Laf* - I mean, "that school in Easton". They're within a marathon of our school and the Leopards compete with us in everything, but it's the football game on the third week in November - called, simply, "The Rivalry" - that will, as you'll see, consume the entire campus as the football season goes along.

Lehigh and Lafayette have played each other in football more than any other school. "The Rivalry" is not the oldest, but it did begin in 1884 and they have faced off against each other 144 times. The week before they play in November, things will (let's just say) get a little crazy, ending on that Saturday with (hopefully) a sound drubbing of the Leopards. Whatever happens, you won't forget it - it will be an integral part of your college memories. (Or lack thereof.)

When you go to your first home football game - perhaps on September 5th, when Lehigh hosts Central Connecticut State in the home opener - contemplate letting out a chant of "Lafayette Sucks!". And don't be surprised when the rest of the section chimes in. They know: it's a key part of being a Lehigh fan.

* Start Hating the Ivies. Harvard, Yale and Princeton - three of the biggest institutions of higher learning in the world. And they're coming to visit South Mountain this year. The Patriot League loves beating their Ivy League brothers in football, and gleefully enjoy denying the Ivy League undefeated seasons. (And those games are never easy: frequently, Lehigh ends up playing against players who find themselves in NFL camps or on NFL rosters.)

The Patriot League plays many Ivy League schools as out-of-conference games - some years, as many as four different Ivies. Both leagues have had a very close relationship over the years, and have a league rivalry that is unique. The record of all the Patriot League and Ivy teams are tabulated during the year: and folks at the Patriot League office love it when they come out on top, and even better if our teams knock off their eventual champion(s).

Of all the taunts I've heard about the Ivy League schools, no taunt seems to work as well as that old standby, "Safety school". Raising your Yuengling while tailgating with your pinkie held high seems to work too, but it just doesn't have that same je-ne-sais-quoi as "Safety School".

* Know Your FCS Football. Lehigh doesn't play in meaningless bowls (like that state school in the middle of the state. Who are they again?). The Mountain Hawks play in the Patriot League and count as our football leaguemates "that school in Easton", the Bucknell Bison, the Georgetown Hoyas, the Fordham Rams, the Holy Cross Crusaders, and the Colgate Raiders. We play for the Patriot League championship, and our champion receives an autobid to the FCS Playoffs where we compete against the likes of Montana, Appalachian State, Richmond and (hopefully) Delaware for a national championship.

USC, Michigan and Lehigh all play Division I football. There is no I-AA: it's all Division I. One spends a lot more money to compete in exhibition post-season bowls for an exhibition crystal ball championship (FBS); the other spends less money and operates under some different rules, but competes for a true NCAA national championship at the Division I level (FCS). Last year there was only one official NCAA national champion in football: that was Richmond, who beat Montana 24-7 in the National Championship game in Chattanooga, TN.

That's where you should want Lehigh to be. This year. It may be a very ambitious goal, but it's quite possible. In 2003, Colgate went to the national championship game, and not all that long ago in 2004 Lehigh came within a late drive of beating the eventual national champion, James Madison, at home in a 14-13 defeat.

* Finally, know your Engineering. I admit it: I'm a big fan of Clutch Hawk, Lehigh's mascot, and the Mountain Hawk, the name of Lehigh's sports teams. But it's worth mentioning that back in the day it wasn't the Hawks: Lehigh's sports teams used to be the Engineers, a team name that pretty aptly described the student-athletes playing the games.

Some folks are rabid Engineer fans. They don't like the Hawk - they think it was a travesty that Lehigh got rid of one of the most unique (and descriptive) team nicknames on the planet. Admittedly, it was fun to hear opposing cheerleaders try to say "Beat... Those.... Engineers!" But I've embraced the Hawk - Clutch really adds something to football games. And the Hawks do fly around South Mountain and Murray Goodman stadium all the time, making Lehigh's fan section ("The Nest") seem like, well, a Nest.