No Patriot League Excitement in the NFL Draft 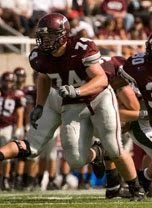 As expected, this weekend's NFL draft came and went without a single Patriot League name getting announced. Overall, only 15 football players from Football Championship Subdivision got drafted, making it a relatively light year for FCS draftees in general - and like the Patriot League, the Ivy League was completely shut out as well.

In terms of Eastern FCS schools, four players from FCS schools that faced Patriot League competition were drafted: Richmond DE Lawrence Sidbury (4th Round), Furman CB William Middleton (5th round), and Liberty RB Rashad Jennings (7th Round). (Lehigh didn't line up against any of these teams, though "That school in Easton lined up against - and beat - Rashad Jennings and Liberty.) Other Eastern FCS schools that had players drafted were William & Mary CB Derek Cox (3rd Round) and Monmouth (NJ) TE John Nalbone (5th Round).

I fully expect to hear Georgetown DE Atefiok Etekuren will join an NFL team as a free agent shortly as well, as Colgate RB Jordan Scott.

And for good measure, other conferences:

More info as it becomes available.

Anonymous said…
I'm shocked that Mcleod, Yale's RB, hasn't been invited to an NFL camp. He seems to be a Brian Westbrook kind of runner and receiver.
1:16 PM

Anonymous said…
Any word on Phil Azarik of Bucknell
11:49 PM