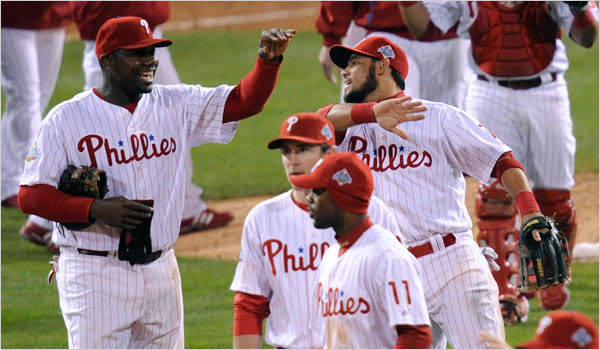 That's what my wife, the Phillies fan, said to me after Brad Lidge stuck out the last batter, got on his knees and pointed up at the sky - and after Ryan Howard and the rest of the Phillies gang-tackled him at the mound.

First pitch, 8:37 PM on October 27th. Last pitch, a little after 10:00 PM on October 29th. In between, a weather pattern that seemed to imply that a second Phillies World Series was having a rough time fitting in with the cosmos. Pouring rain, which caused the first (and only one, to this point) World Series game suspension. The next day: rain, sleet - and snow, for the first time in this area in 30 years. Even earlier today it wasn't at all clear that the game would go on with more sleet and snow.

Much was made about Philadelphia's drought with pro sports franchises in the past 25 years, the curse of William Penn, and the like. The attempt of folks to shroud it in some sort of "curse", it must be said, was laughable. Beleive that the city ordinance had something to do with it if you must, but I think the drought had a lot more to do with cheap money-grubbing owners scrimping on players and leasing one of the most charmless, cookie-cutter stadiums for the better part of twenty years before getting Citizens Bank Park.

Yeah, they did have 1993, which has retroactively become one of baseball's "loveable losers" teams, talked about in the same tones as the "Whiz Kids", mostly because crazy John Kruk was on that team. But that team was notable for being mostly a team of reclamation projects - Kruk, Len Dykstra, Jim Eisenreich. Mitch Williams was basically cast from the Cubs and the Philles, desperate for a closer, took him.

1993 was the aberration. When I think of the 25 year drought, I think more of Von Hayes than I do John Kruk.

Now the Phillies, awash with cash and with (uncharacteristically) smart management, Philadelphia finally has the team they deserve. Young pitching, the best bullpen in baseball, bona-fide bats in the lineup, built painstakingly over the course of several years.

Enjoy, Phillies fans. You finally have a team you deserve.

Anonymous said…
This almost makes up for the worst Lehigh football team I've seen in 30 years. I will savor the victory because the next one may be a long time in coming.
11:07 AM

Anonymous said…
The Phils did deserve it this year.... I think the Rays left their Mojo at Fenway.... This young team did not field very well in this series or even in the Boston series.. The baserunning left a lot to be desired as well... Pitching was not bad except for the one game... A few key hits and it could have gone the other way in certain games... Of course if the Phils had hit better in St. Pete, it might have been done in 4.... who knows??

As for the comment about the Lehigh football team... I agree they are mediocre but the 30 year comment was way off base.. That wsa during the Whitehead years... hard to believe... They had some down years during the Small years... but talk about bad, mid 60's was the pits... before my time so I am spoiled like everyone else here... You really gotta wonder what is going to happen??? I thought they fought back well against Holy Cross but that is a veteran team... They should beat up on Georgetown and Bucknell but Colgate should be close... As for the Pards... I for one would like to see Lehigh for once pull an upset... I've never seen it.... it's always been Lafayette coming up with the big game to beat big bad Lehigh
2:22 PM