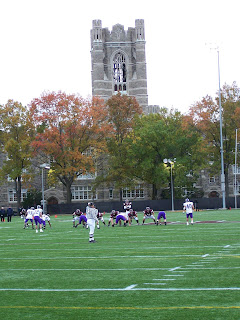 I was in the Bronx this weekend to watch the Holy Cross/Fordham game, and the pictures of that should be up soon at the College Sporting News for your viewing pleasure. One of my shots is to your left - is this the prettiest spot in the Bronx, or what?

Before we sum up the goings-on around the horn, I wanted to ask Lehigh alumni (and alums from "that school in Easton") for some personal stories of the most-played football rivalry. It doesn't matter if you're a fan, a player, or just an observer, I'm looking for a list of different stories to list on a special blog posting during "Rivalry Week". "The Rivalry" will be a week of celebration of the Lehigh/Lafayette game, and I very much would like to have a posting detailing what has made it great for you over the years. You can email me at charles.burton@collegesportingnews.com to share your story!

I also wanted to point out that Any Given Saturday, the premier FCS message board in the country, is being sponsored this week by fans of Lehigh and Lafayette. This means that every day a new fact is posted about "The Rivalry" on a special thread on the board. Just in case you weren't pumped up enough already about November 17th.

Let's go around the horn.