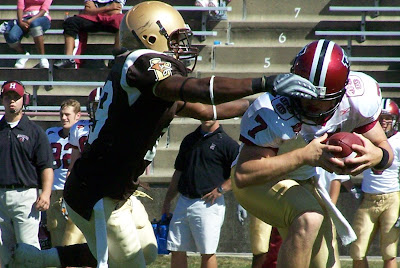 It's not a situation Lehigh fans are familiar with. A Lehigh team that is 3-1 in September, whose main engine is special teams and defense. The Lehigh defense is getting in the face of opposing quarterbacks, and getting things done. When has this ever been the case? Yet here we are, which you'll see in the mash-up.

The win over Harvard impressed votes in the Sports Network Poll, too: jumping in front of Furman and just behind Georgia Southern in the "Others Receiving Votes" category. Five spots above "that school in Easton", Lehigh is 29th in the poll, and should we get a win over Fordham next week, we could possibly be poised to rejoin the Top 25 for the first time this year.

And the first recipients for Patriot League players of the Week (aside from freshman RB Kwesi Kankam's two "Rookie of the Week" awards) were on defense and special teams: junior LB Tim Diamond's 22 tackles, forced fumble and fumble recovery, and junior P/K Jason Leo's eight punts for a 44.1 yard average, including six within the 20 yard line, and three within the 6 yard line. Diamond was not forgotten at College Sporting News either, earning national defensive player of the week honors.

I could get used to winning at Goodman again. Everyone prefers home cooking.

Defensive tackle Paul Bode's 27-yard run with a fumble with 30 seconds left gave Coen's Mountain Hawks an improbable victory on a day in which it was largely outplayed.

Harvard had the ball for nearly 17 minutes more.

But thanks to special teams and the late takeaway, Lehigh won its third straight game entering next week's Patriot League opener at Fordham.

"There's no such thing as a bad win in football," head coach Andy Coen said. "It's very surprising to win a game where you don't score an offensive touchdown or convert one time on third down. It doesn't happen very often. But it happened today."

Coach Coen in the post-game press conference talked about how proud he was of his team. "All we talk about is competing. 'Fight Like Champions' is our motto this year, and I talked to the team last night about fighting for 60 minutes last night, and we obviously did that today."

"We did everything right but finish the game," said Harvard coach Tim Murphy. "Our defense played heroically."

“To be perfectly honest, it doesn’t get more gut-wrenching than that. We’re two plays away from being 3-0, and I’ve never been through that at an early stage of the game in 20 years as a head coach.

Murphy was quick to come to his quarterback’s defense after the game.

“I feel bad for Chris because he played really well, and he did everything he could to help us win the football game,” he said. “It’s very frustrating for it to have to come down to a play like that.”

"We struggled on offense, but that's why defense and the kicking game are important and special teams were huge," Coen said.

Linebacker Tim Diamond, a hero with 22 tackles, including the one that caused the game-winning fumble return by Paul Bode, put it perfectly.

"That's why football is the ultimate team game," he said. "When one side of the ball is not doing the job, it's up to the other side to step up. Everyone kept their cool and kept playing to the last minute."

"Coach [Dave] Kotulski [Lehigh's defensive coordinator] made a great call, a gutsy call, sending in the blitz [on the game-winning strip]," Diamond said. ''I was just looking to get the ball out, make a play."

Diamond got to Pizzotti as he was about to throw, and the ball came loose.

"I was just trying to get the ball out, make a play. It was pretty close to being a forward pass and I was hoping all the time that the ball was on the ground that the refs wouldn't blow the whistle and call it an incomplete pass," Diamond said.

Bode didn't hesitate. He grabbed it and ran.

"It was a great feeling," Bode said. "When I saw [Pizzotti] run at me, I knew it was pretty serious. "I didn't want to fall on it at that point. The game was too precious. I actually scored another touchdown as a freshman at Fordham. But this was the biggest of my career."

Before the Mountain Hawks could celebrate, they needed one more big play.

Harvard advanced to the 50 and tried a hook-and-lateral play that nearly worked.

However, the Crimson's Mike Cook tried one too many pitches, forcing an ill-advised errant toss that, fittingly, Diamond fell on at Lehigh's 28 with four seconds remaining.

"It's good for the offense," said Diamond. "They know the defense has their back."

Back in August, Lehigh quarterback Sedale Threatt said one of his goals for 2007 was to keep Jason Leo off the field as much as possible.

It was nothing personal.

It was just that if Threatt and the Mountain Hawks' offense were clicking, it meant touchdowns and less opportunities for Leo to either kick field goals, or, even worse, punt the ball.

"Jason has done a great job for us; he did it all last year when he was the MVP of the league for special teams," Lehigh "coach Andy Coen said. "In a game like this, field position is going to be a key factor and we count on Jason to get the job done and he did.''

"Coaches were preaching it all week that special teams were going to play a huge part," he said. "So, we buckled down; made sure everything was where it needed to be."

Leo has been using an intriguing and effective rollout, or rugby-style punt, in which he takes the snap and then runs to his right for about five yards before tilting slightly and launching into the ball.

"It's something that [special teams] Coach [Adam] Scheier and Coach Coen came up with," Leo said. "It frees up guys to get down the field and cover the kick. It has been working out awesome.

"It has been good for me personally because last year I'd go from kicking field goals one way and then punting the ball with an entirely different motion. This is sort of in between and it has been coming off my foot great and we've been real successful."

Harvard didn't return a single punt on Saturday and opponents have returned just three punts all season for a total of 20 yards.

Leo said that he is still getting comfortable with the new kick-in-motion style.

"It takes some getting used to. It just takes a lot of practice."

When handing out accolades, Coen couldn't ignore at least one offensive player.

Junior tailback Josh Pastore, thanks in part to an injury to freshman Kwesi Kankam, got his first significant action since Game 1 and responded with 42 yards on nine carries. He also caught three passes for 28 additional yards.

"Josh didn't play well against Villanova and hasn't been at full strength for awhile, so he needed to step up and he played very well [Saturday]," Coen said. "He had one fumble near the goal line when he was trying to get extra yards down there and sometimes those things happen. But it was good to see him back in there."