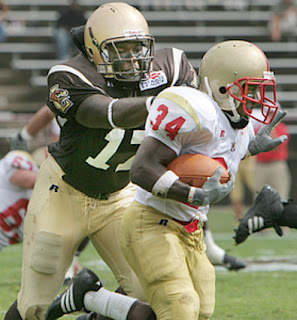 Somehow, I don't think the photo to my left is of freshman QB J.B. Clark, although he and senior LB Justin Weaver share the same number. (Photo courtesy of Demetra Stamus, Morning Call.) Aside from the missed photo credit, the press seemed pretty rosy about Lehigh this week after their 37-6 drubbing of VMI.

In the Sports Network Poll, Lafayette squeezed a few more votes than Lehigh and Holy Cross as the Mountain Hawks and Crusaders continued their slow climb to the rankings. It's still a bit of a way to #25, but only a handful of votes separate Lafayette (37), Lehigh (31), and Holy Cross (30).

Here's the links and mash-up.

Fifty years ago, VMI came to Lehigh and played what some consider to be one of the best games in Taylor Stadium history.

VMI won a battle of the unbeatens that day, 12-7, giving the Engineers their lone blemish in an 8-1, Lambert Cup-winning season.

That '57 team was honored at halftime Saturday at Goodman Stadium.

And, perhaps those guys gained a measure of satisfaction from the 37-6 pounding the current Lehigh team administered to the 2007 Keydets.

"We talked all week about not coming out flat," said Lehigh coach Andy Coen. "In the second half we got a little conservative, but when we got back to doing the things we did in the first half, we drove right down the field."

"When you play against that style of attack, staying disciplined is the key," Coen said. "We did a real good job of tackling. They had just a few broken tackles all day. We looked back on the Villanova game [a 30-20 Week 1 loss] and thought we needed to be more aggressive, more emotional on defense. We want to fly around to the ball, but at the same time you can't lose that discipline."

"Defensively, we played lights-out the whole game," Coen said. "This is a very emotional group of guys playing right now."

"We're satisfied today, but I've already told these guys we've got a very good team coming in here and we're going to have to execute better and play a very good game to have a chance," Coen said.

Even wide receiver and Bethlehem Catholic grad Pete Donchez joined the first-half fun with a 66-yard option pass to Johnson for a score.

"We practiced that play a lot this week and it was a little rocky at practice," said Donchez, who was one seven different pass-catchers, but the only receiver to throw a pass. “The whole week we were talking about catching the ball and selling the fake. I kind of had to rush the throw.

"It ended up working out really well. That was my first shot at being a quarterback and I enjoyed it."

What made the play most impressive was Donchez -- more accustomed to being on the receiving end of such big throws -- unloaded one under duress, releasing the touchdown bomb just before taking a shot.

"I could see the defender coming out of the corner of my eye," Donchez said. "Nick made a great play on the outside to sell the block and get open, so, it wasn't that hard to hit him in the numbers."

"It was very catchable," praised Johnson. "I just had to sell the safety a little bit. My eyes got a little wide."

TE Troy Healion, a junior, has stepped in and more than adequately filled in for senior Joe Sutherland at tight end.

"Joe getting hurt in the first game gave me an opportunity,"Healion said. "He's getting better now and he's the better blocker. I just want to maintain a part in the offense.

“In the red zone all we want to do is take the attention off the outside guys and make plays,” Healion said. “The opposing teams don’t have one particular player to single out on our offense. We can all make plays and that makes the offense work well. We need to continue to dominate and not settle for field goals.”

WR Nick Johnson, too, has given the offense a different dimension.

"The coaches put me in a great position to make plays and I just feel it's my duty to come on the field and make them," said the junior from Lusby, Md. “It is a lot of fun to go out there and know you’re going to get opportunities to make a play. Every person on the offense has the potential to make a big play.”

"My first two years here were definitely a building block. I was behind some guys with more seniority and more savvy and now I'm getting my chance."

Anonymous said…
I noticed a couple other players share the same number. How does that impact participation?
12:35 PM