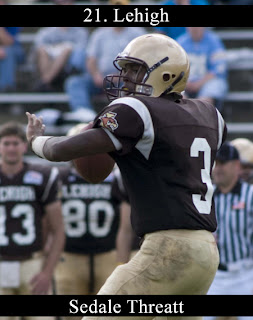 Three really quick hits: first of all (and I hope this is a regular thing) Lehighsports.com posted today a report on their first preseason practice.

“I’m very pleased with the excitement of our guys and the effort they have put forth up to this point,” second year head coach Andy Coen said afterwards. “With so much information given to the freshmen at once, I think they have picked it up well. I’m excited about this freshmen class and what lies ahead for them.”

Yeah, I know, it's not a lot of meat. But throw a starving man a bone... it gets you thinking. "He's excited about the freshman class.. who could be pushing for starting nods? Who's going to be that backup left guard? How many hours until 1PM on September 8th?" It's probably the superfan in me more than anything else. Still, I realy hope they will keep this up.

Second of all, a word on polls. It looks like the winner of the T-Shirt poll was "Westbrook Can't Help You Now", which I have to admit was my favorite too. Look for a new one soon - and speaking of polls, the Morning Call has one that Lehigh fans may want to vote on.

Finally, College Sporting News should, barring anything unforeseen, be releasing the FCS Preview magazine (in PDF format) by the end of this week. (That's where this graphic of Sedale comes from.) Look for instructions on how to get your copy soon.

Anonymous said…
In addition to Parrot, there was another running back named Moore who played a lot and ran hard in the spring game. It appears as though he is not on the fall roster as well.
5:50 PM