Oops.. Bucknell Did It Again 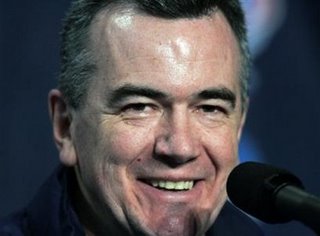 You have to give Bucknell and head coach Pat Flannery a lot of credit - and a hearty "thank you" - for yet another amazing first-round win in the NCAA Men's Basketball tournament.

Make no mistake, as amazing as last year's shocking win over Kansas was, this was even more amazing. Sure, Bucknell last year was a 14th seed, flying completely under the radar of a struggling Kansas team which was predicted to miraculously overcome their struggles to dispatch of a lightly-regarded Patriot League school that not only who weren't favored to win their league - they were representing a conference that many NCAA basketball fans would have argued to give up their autobid for another middling C-USA team.

The Bison had shaken the mantle of obscurity this time. Anyone can get lucky in the NCAA Tournament once. Princeton won once. Vermont won once. Coppin St. won once. But to turn that into another win, with the weight of expectations on you, with every coach in America having seen your game films - that's different. A red-hot Arkansas team, athletic and well-coached, knew what they were in for on Thursday.

Incredibly, Arkansas was forced to play Bucknell's game, and the Bison executed almost perfectly. Sure, there were some inopportune turnovers - Bucknell's ever-present weakness - but it was the little things that mattered. Donald Brown had 1 point to his credit, but his half-court pass to phenom Charles Lee could have been the play that iced the game for the Bison. Abe Badmus, an under 70% free-throw shooter, cooly iced two free throws and iced the game.

To take nothing away from Charles Lee and Kevin Bettencourt - whose scoring from outside the arc kept things going - but this was an entire team effort against a more athletic team that knew that they were coming, and could do nothing to stop it.

Think about that. Penn routinely makes the tournament, are considered a "tough team" and routinely drop games to bigger-conference foes. Bucknell goes 2-for-2 in consecutive years. That's amazing, and it doesn't happen every day.

Although the press might say that Bucknell's more subdued, and it's not realy an upset, this is one that really deserves a heap more credit that is being given around the nation. Aside from what it means for all the basketball members of the Patriot League - not only more respect, but it actually translates into more money from the NCAA - it establishes Bucknell as not merely a one-hit wonder.

Why can't Bucknell do the same thing against Memphis? The recepie is there - all you need to do is look at the quotes from one of my all-time most hated college basketball coaches of all time, the arrogant, self-important, recruiting-violation-waiting-to-happen coach John Calipari:

"This is a hard game to prepare for. They run too much stuff, they hold the ball," Calipari said. "Our guys, they have no idea that they're not going to run with us. ... This is a terrific team we're playing."

Calipari hadn't even shown his players any film of the Bison before they practiced at the American Airlines Center on Saturday afternoon... "I don't want to scare them," Calipari said. "I don't want their heads spinning."

It's even hard to cut-and-paste the arrogance. I've never liked this empty suit, and my anger just went up a few more notches after seeing these quotes. It's clear the man has no respect. Not showing them any film of Bucknell? Don't want their heads spinning? He can't be saying those things seriously.

If you are a college basketball fan wandering over to my blog, if you're a fan of anything that is decent and pure, you have to root for our Patriot League brethren Bucknell. It will wreck my office pool - it will also probably wreck yours. But I know who I'm rooting for.

EASTON, Pa. (www.lafayette.edu) - Lafayette trustees have unanimously approved a revised financial aid policy for student-athletes as part of a broader plan to strengthen the College's intercollegiate athletics program within the Patriot League and to support the College's overall academic mission.

Meeting in special session, the Lafayette board accepted the recommendations of Lafayette President Daniel H. Weiss and agreed to:


Offer merit-based athletic scholarships in men's and women's basketball beginning with the Class of 2010.

Offer merit-based athletic scholarships in strategically selected men's and women's sports beginning with the Class of 2011.

Establish annual goals for the enhancement of the academic profile of the entering class of student-athletes and each of the designated teams.
While a significant departure from Lafayette's current program of providing only need-based aid to student-athletes, the new policy redistributes current financial aid dollars to certain sports without increasing existing allocations. Lafayette will continue its full slate of 23 NCAA Division I varsity athletic programs.

In both men's and women's basketball the financial aid allocations for the current recruiting class are sufficient to support three full merit-based athletic scholarships. This money will be made available to the head men's and women's basketball coaches to provide three merit-based athletic scholarships for each team for the class entering in the fall of this year.

Providing three men's and women's basketball full athletic scholarships in each year's entering class will continue for a four-year cycle until each team has 12 student-athletes on full scholarships.

The program establishes annual goals for enhancement of the academic profile of the entire entering class of student-athletes, a goal consistent with the overall academic mission of the College.

Lafayette trustees chair Alan Griffith commended Weiss for undertaking "a thorough, thoughtful and exhaustive study of the athletic issue" and noted that "the trustees, faculty and administration have each given their strong support to the President to implement his recommendations."

Weiss formed a working group of faculty, students, alumni and administrators in October 2005, after assuming the presidency in July. The working group concluded its assessment and study in February 2006, and made recommendations in four areas:


The academic standing of Lafayette students who participate in intercollegiate athletics.

Lafayette's competitiveness on the athletic field.

The sustainability of Lafayette's athletics budget and the amount of capital investment needed.

The strategic positioning of the Patriot League itself.
"I am grateful for the serious and dedicated effort of every member of the working group," Weiss said. "They have been enormously productive and helpful to me and the College. They have assessed the challenges, and evaluated options in a process that reflects the representative thinking of our community."

Lafayette Director of Athletics Bruce E. McCutcheon said the scholarship program "is designed to support the enrollment goals of the College, remain financially viable, and allow Lafayette to be more successful with enrolling high quality student-athletes, regardless of their demonstrated financial need."

McCutcheon noted that each of the Patriot League institutions that have implemented athletic scholarships "have been able to enroll student-athletes who not only make significant contributions to each team, but exceed academic expectations and bring to the campus racial, geographic, and socio-economic diversity."

"I believe it was very important to address and resolve a number of issues facing our athletics program," Weiss said. "I made this issue a high priority. The College has tremendous positive momentum and the entire Lafayette community can now be fully engaged in the broader strategic vision of academic excellence."

Anonymous said…
I heard commentary recently that Lafayette wanted to join the A10, could the scholarship vote, be related to that end? Any insider knowledge would be appreciated.
8:05 AM

Anonymous said…
I know I don't care about Bucknell. I hope they get blown out!
10:00 AM

Anonymous said…
Don't care about Bucknell either and I care even less about Easton Community College.
4:21 PM

Anonymous said…
How were John Calipari's comments about the Bucknell basketball team offensive? He was very complimentary. By saying that he didn't want to show the team tape of Bucknell was the utmost compliment. He was saying that they run a very complex offense and he didn't want the Tigers intimidated. Obviously you have reading comprehension problems.
10:10 PM

Anonymous said…
How were John Calipari's comments about the Bucknell basketball team offensive? He was very complimentary. By saying that he didn't want to show the team tape of Bucknell was the utmost compliment. He was saying that they run a very complex offense and he didn't want the Tigers intimidated. Obviously you have reading comprehension problems.
10:11 PM

Anonymous said…
Isn't it about time to remove Bucknell's goofy coach from our website. Not impressed with him or his team. Let's get back to what we come here for. Spring workouts start this week, coaches camp on campus, guys fighting for positions, new coaches, what lies ahead. You do a nice job, but goofy has to go!
11:58 PM

Anonymous said…
This guys face is in the wrong place!
1:40 AM